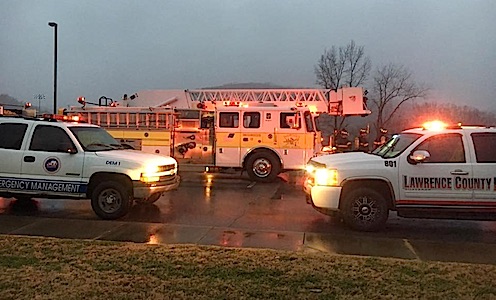 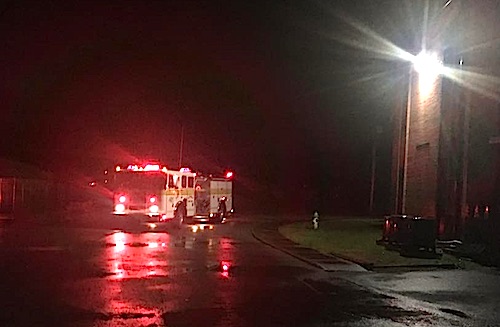 EVACUATION, CONTAMINATION, ENVIRONMENTAL DAMAGES, AND HEALTH & SAFETY CONCERNS LEAD TO BUILDING BEING QUARANTINED AND SEALED OFF, CAUSING LOCAL PARENTS CONCERNS AT WHAT POTENTIAL DANGEROUS CHEMICALS & MATERIALS MIGHT BE STORED AT THE HIGH SCHOOL…

The students and school personnel of all Lawrence County schools got an unexpected day off from classes, as all schools in the county are closed today (WEDNESDAY Wednesday, December 7.

And the no school day proclamation happened because somebody caused an accidental “acid trip” at Lawrence County, causing a chemical spill inside the school, leading to the evacuation and closure of the building so that the spill area can be adequately cleaned, thus disrupting the entire integrated school schedule process. 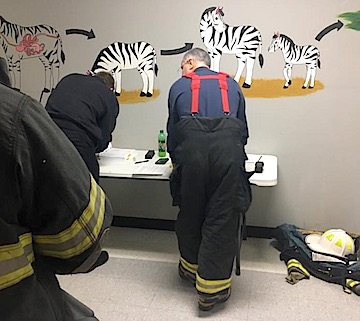 On early Tuesday evening December 6, About an hour and a half after Lawrence County High School classes had ended and most students and school staff had left for the day, according to Lawrence County Emergency Management officials, at just before 5 P.M., Lawrence County E-911 received a call of a hazard chemical spill of a dangerous material in the vicinity of the school’s chemical lab room.

E-911 contacted the Louisa Fire department, and department units were immediately dispatched, along with other local emergency units,
responded to LCHS within minutes.

Once fire and emergency personnel arrived on the scene, they discovered that a small amount of industrial strength acid (rumored to be sulfuric acid), had been spilled inside a contained room next to the chemical lab. (see photo)

The person or persons who caused the spill have not been identified, or whether the spill was accidental or something of a more devious nature.

Louisa VFD personnel immediately evacuated everyone from inside the school and once everyone was outside, emergency officials sealed off the entire building, and contacted a hazardous materials team from the Ashland Ky Central Fire Station – Station 1 to respond.to the school to clean up the spill.

The fire department reported that everyone in the school when the spill took place was safe and that no injuries were reported.

Once the HazMat team arrived and immediately cleaned up the spilled chemical materials, at just before 7;30 P.M., Lawrence County Schools Superintendent Dr. Robbie Fletcher announced that all county schools were to be closed on Wednesday, for that even though the initial spill had been contained and cleaned, further cleaning was needed before the storage room can be used.

The high school had additional damage to tile and walls, which will require more overnight cleanup, so it was decided the school would be closed to avoid rushing the final stages of the cleanup process and to allow a thorough inspection.

Below is Fletcher’s official press release on the spill and the closure of all schools in the county.

As for the chemical spill:

“The chemicals that were spilled in our chemical storage room have been cleaned and disposed. Ashland Fire Department’s Hazard Materials Team removed the actual liquids that were spilled. (Approximately 0.5 – 1.0 gallons of chemicals were involved.) Unfortunately, the chemicals seeped into the floor tiles, sheet rock at the floor border, and some wooden shelving. The Weavertown Environmental Group was called to remove the affected materials, and all have been removed. The environmental group also finalized the sanitizing process today, which included multiple air quality tests in the storage area, adjoining classrooms, and hallway. All test results were good, thus Lawrence County Schools will be in session on December 8, 2016.

The decision to call of school (for December 7) was made out of an overabundance of caution. We wanted to ensure that the lab storage area, as well as the adjoining classrooms, were safe for our staff and students. School officials were permitted in the storage area earlier today, but we wanted to take every precaution before making a final decision of whether school is in session for tomorrow. Our sincerest gratitude to Lawrence County Emergency Management, our Police and Fire Department officials, the Ashland Fire Department, the Weavertown Environmental Group, and our school staff members for all efforts for the safety of our students.”

Superintendent Fletcher released another statement just before 11 P.M about the status pace of the cleanup. 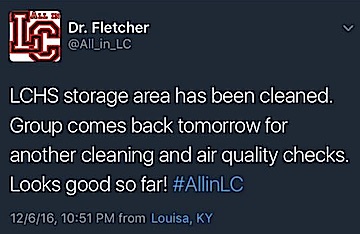 Numerous agencies and organizations from around the area responded to the chemical emergency at Lawrence County High School Tuesday evening. All of those that helped in situation were listed as the following: 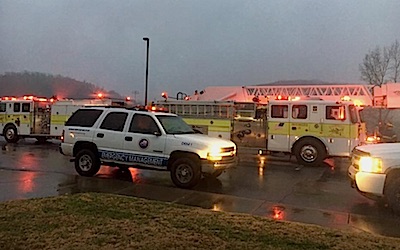