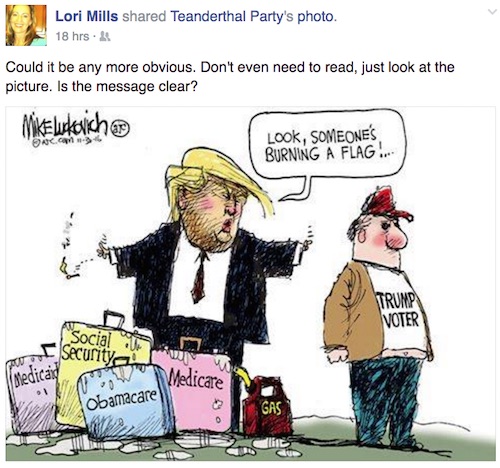 If you bring firearms to a peaceful assembly in a library, expect some social media blowback.

Two men wearing “Make America Great Again” hats and firearms sat quietly in a room at the Covington library. They watched 15 people make posters for an “anti-hate” rally this Saturday to protest policies of President-elect Donald Trump, one of the organizers, Rachael Winters, posted on Facebook Wednesday night.

While nothing got out of hand, the decision of the two unidentified men to openly display firearms has caused a stir on social media. Many commenters saw it as an intimidation tactic.

Winters spoke with the men and told them she wanted to organize a rally to protect her marriage to her wife. They didn’t have much to say back, Winters wrote in the post.

“They sat there with their guns and “Make America Great Again” red hats while we worked on our signs and refused to be intimidated,” Winters wrote in the post.

Library director Dave Schroeder said he was aware of the situation but the meeting ended peacefully. State law requires libraries to allow for people to open-carry firearms or conceal carry if they have the proper permit. Also, library meeting rooms must be kept open for the public and allow all people in so long as they aren’t creating a disturbance, he said.

In the case of this meeting, library staff had no cause to bar anyone from the room, he said.

“Everybody was very respectful of one another,” Schroeder said.

Winters and the others are part of a loosely-knit NKY Unites organization that will march through Covington on Saturday beginning at noon.

Neither Winters nor library officials could immediately be reached for comment Thursday. Kentucky state law allows for open carry in most government buildings, including libraries.