Update on Nov. 16 Drug Bust By US Marshalls

Despite Arguments From Both Lawyers, the Couple Busted By US Marshall’s are deemed “A Danger To The Community” 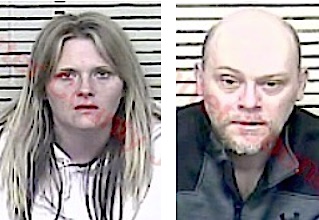 Glen and Heather Fluty were in court to make their argument for release in a detention hearing held in a Lexington, Ky. Federal Court on November 22nd.

Atty. Ned Pillersdorf represented Heather Fluty, while Glen was represented by Billy Slone. Both defendant’s lawyers made a case that the two were not a flight risk and that Glen Fluty had serious health concerns and there where no concerns that the two would not abide by any conditions of release.

According to the Pretrial hearing results, the couple had been trafficking from their home on Deer lick Rd. on Rt. 32 where their children and Heather’s step mother also reside. During the raid the police did not find any drugs only a large amount of cash and several guns, some with unspent bullets.

Despite the attorneys arguments, the court found that the two Lawrence County residents were a danger to their community and that they would remain detained until their trial set for February 2017.