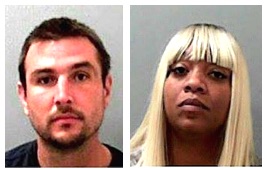 According to a post by the Wayne County Drug Enforcement Unit, on Wednesday November 30, while working with the DEA intercepted a shipment of Oxycodone coming from Detroit to Fort Gay area.

A Wayne County resident and a Detroit resident were arrested and charged with Possession With the Intent To Deliver and Conspiracy. The Drug Enforcement Unit estimates that the drugs seized were a street value of over $17,000.

Dennis Ransbottom, 31, of Ft. Gay and Tuniesia Adams, 38 of Detroit, Mi. were apprehended Wednesday, Nov. 30 and detained and held at the Western Regional Detention Center on a $150,000 cash only bond.