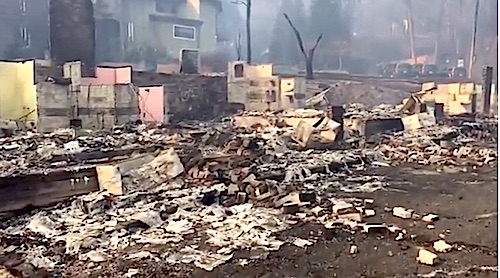 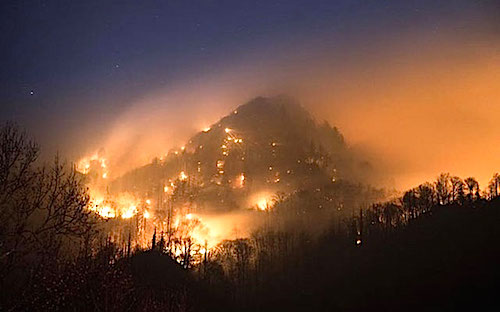 Rain last night and this morning has done little to quell a wildfire that started in the Tennessee part of the Great Smoky Mountains National Park and led to the mandatory evacuation of more than 14,000 visitors and residents in the parkside town of Gatlinburg and nearby communities, Amy J. Vellucci and Jamie Satterfield report for the Knoxville News-Sentinel.

Officials from the Tennessee Emergency Management Agency said “there was ‘little hope’ that the rainfall would bring relief anytime soon.”

“Emergency responders have struggled to make a dent into the fires that have devastated Gatlinburg, Pigeon Forge and surrounding areas in Sevier County since high winds helped the flames spread Monday evening,” Vellucci and Satterfield write. The Tennessee National Guard said it has made plans to dump water onto the flames from a helicopter. A state forestry officer said winds in advance of the front that brought the rain reached sustained speeds of 30 to 40 mph, with hurricane-force gusts, sweeping the fire from the park into the town. Three fire victims were in critical condition at Vanderbilt University in Nashville, the News-Sentinel reported. 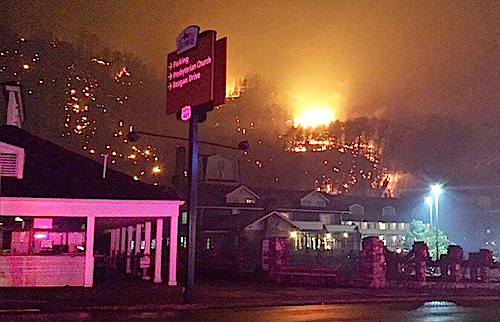 News reports said more than 150 structures had been destroyed, including all 100 buildings of Westgate Resorts. The Dollywood amusement park in Pigeon Forge was evacuated, but no damage has been reported. No fatalities have been reported. Volunteer Fire Department Lt. Bobby Balding told the Sentinel, “The center of Gatlinburg looks good for now. It’s the Apocalypse on both sides (of downtown).”