Hindman, Ky.  — A Central Appalachian community hopes its rich artistic history will help boost an economy hurt by the downturn of coal, Tom Eblen reports for the Lexington Herald-Leader from Hindman, Ky., seat of Knott County, which has lost more than half its coal jobs in the last few years.

“Economic changes have renewed interest in developing the region’s creative industries. And why not? Bluegrass music and Appalachian crafts are popular around the world. Smart, talented people have always come out of Kentucky’s mountains; the problem was they usually had to move elsewhere to earn a living.” 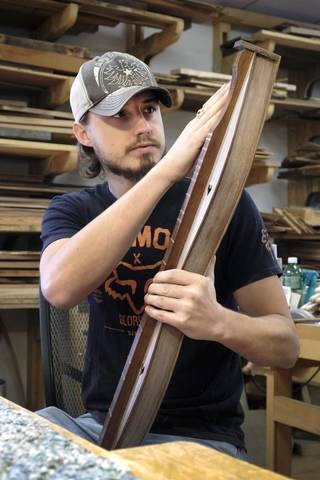 One way Hindman hopes to change that is through the recently opened Appalachian Artisan Center, which “has a variety of job-training programs under way, including pottery, metalworking and stringed-instrument making,” Eblen writes. Hindman has long been known as an artistic center, led by the Hindman Settlement School, which annually hosts the Appalachian Writers’ Workshop and Family Folk Week, both of which draw well-known Appalachian writers and musicians.

“In addition to training Eastern Kentuckians in marketable, arts-related skills, the center sees potential in cultural tourism—attracting hobbyists to come for days or weeks to learn instrument-making and other traditional skills,” Eblen writes.

Another key for the region is the Hindman School of Luthiery, which was created by grants “to capitalize on the local heritage of dulcimer-making and the popularity of bluegrass music,” Eblen writes. Doug Naselroad, who directs the school, told him, “We have taught more than 50 people how to build instruments. There’s a lot of talent in Appalachia, and people are ready to go to work.”

One goal for the school “is to partner with the Kentucky School of Craft in Hindman and the Kentucky School of Bluegrass and Traditional Music in Hyden—both divisions of Hazard Community and Technical College—to start a production factory that would sell Troublesome Creek brand guitars, mandolins and other instruments,” Eblen writes.