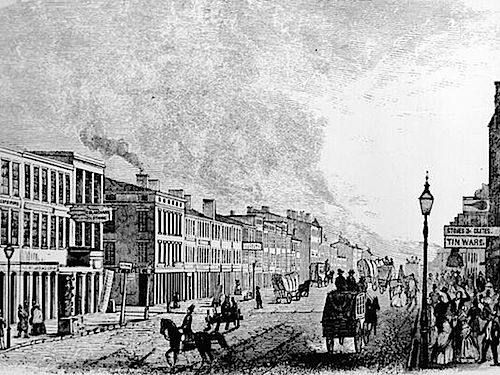 Editor’s note: The Courier-Journal today looks back at Thanksgiving 150 years ago, as Louisville and Kentucky grappled with questions of race, poverty and fairness.

Louisville’s streets were quiet on Thanksgiving Day 150 years ago.

Few people were out, in part because the mud on Nov. 29, 1866, was so deep, and the city’s street crossings already were “the worst in the country,” wrote the Daily Courier.

It was the fourth Thanksgiving since President Abraham Lincoln had proclaimed the last Thursday in November a national holiday, and business was “almost entirely suspended” in Louisville, then the nation’s 12th-largest city.

“The consumption of turkeys, oysters and mince and pumpkin pie was enormous,” the paper reported, “and the dealers in those articles reaped quite a harvest.”

After their enormous meals, some residents retired to the Academy of Music to take in Professor William Tanner with his performing dogs and monkeys and Senorita Rosita – danseuse, pantomimist and tight-rope walker.

For many, there was much to celebrate. As President Andrew Johnson, the former Tennessee tailor, observed in his Thanksgiving proclamation, the year had been “crowned with many peculiar blessings.” The Civil War “so recently closed among us has not been anywhere reopened,” he said, while “intrusive pestilence has been benignly mitigated” and “domestic tranquility had improved.”

But the wounds of war had hardly healed, especially for Kentucky’s 225,483 freed slaves and the 10,684 blacks who had begun the decade already free… 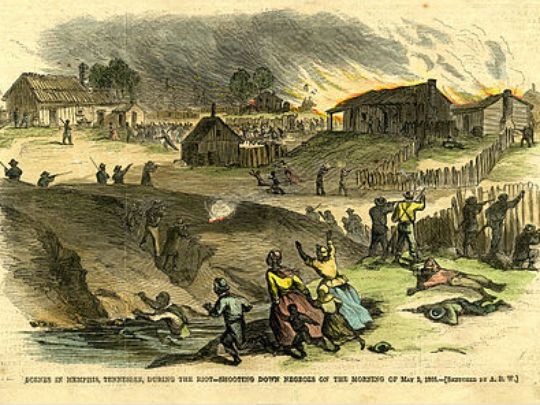 …In her diary, a young Kentucky girl named Lizzie Hardin, who had just returned to the state after two years in Georgia, described “a hatred, bitter, unrelenting” between Southerners and Union people that “promises to be eternal.”

Whites loyal to the party of Lincoln found their lives at risk. In Menifee County, the Rev. Louis Hughes, “an aged and highly respected citizen” who had dared cast a vote for the Republican Party on Election Day a few weeks earlier, was beaten with hickory switches for it “till life seemed extinct,” then had his skull fractured with a handspike to ensure his demise.

Times were harder than today, of course, for both whites and blacks, rich and poor. The average life expectancy was 45 and “old age” was defined as anything over 50. People didn’t live long enough to get heart disease or cancer; the leading causes of death were tuberculosis, dysentery and diarrhea, typhoid fever and pneumonia.

The most common offenses seemed to be “hog thievery” and public intoxication — each drunk was individually described, including a “rural friend from the sweet little village of Bardstown” who had gotten “tighter’n a brick” and was fined $3 for it. A graphic story about the former reported how thieves “drive the hogs till they get near town, then they slaughter them on the highway.”

Louisville was still a young city; the first white resident born there, Thomas Joyce, had died earlier in the year, at age 77. But it already was thoroughly corrupt: Sworn in a year earlier as Louisville’s 15th mayor, Philip Tomppert was impeached because he refused to a sign a law approving a streetcar along Market Street after it was revealed that one of the council members had taken a $5,000 bribe to support it. The council removed him for “neglect of duty.”

Still, the Daily Courier found plenty to celebrate on Thanksgiving. It noted that fleas were gone for season, “retired from public life” by recent cold weather, although some “pests” remained, it pointed out, including “mothers who force disinterested persons to notice their darling children” and “ladies who crowd you out of your seats to make room for their poodles.”

It was also a good day for a reporter assigned to write about Thanksgiving bill of fare at local restaurants. Having “but one stomach,” he said, he picked a single establishment where he gorged himself with oyster soup; turkey stuffed with oysters; roast pig stuffed with sweet potatoes and chestnuts; roast beef; roast venison; prairie chicken; pigs’ feet and jelly; sauerkraut and potatoes a la Bismarck; pumpkin, apple and cranberry pie; and eggnog.

“It would suit us to have thanksgiving come every day upon these terms,” wrote the anonymous scribe.

Yet life was no laughing matter, especially in the South, on that day.

While the North had prospered during the war — and in “some consequence because of it” — wrote The New York Times, the people of the South are “impoverished — some on the verge of starvation. Their crops have failed. They are dispirited and burdened with a load of doubt and fears.”

In Louisville, a concert series was announced for the benefit of the “suffering people of the southern states.”

Black Kentuckians found their newfound freedoms were snatched before they had a chance to exercise them. Gov. Thomas Bramlette, a Louisville lawyer in the third year of his term, opposed ratification of the 14th and 15th Amendments, which gave blacks citizenship and the right to vote… READ MORE