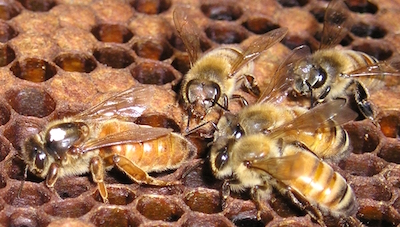 Bad News for Bees and the rest of us
Federal judge: Seed coatings with chemicals harmful to bees exempt from federal regulation
A federal district judge in Northern California ruled Monday that “seeds coated with neonicotinoid insecticides will continue to be exempt from regulation under the Federal Insecticide, Fungicide, and Rodenticide Act (FIRFA),” Stephen Davies reports for Agri-Pulse.

In response to a lawsuit by beekeepers and environmental groups, Judge William Alsup said he was sympathetic “to the plight of our bee population and beekeeper,” but said that the Environmental Protection Agency should have done more to protect bees and it was the agency’s responsibility to make policy decisions on regulations, not his.

The pesticide industry cheered the decision, saying it will prevent more regulation, Davies writes. Plaintiffs said they “were disappointed, but also noted that Alsup ‘dismissed the case on an administrative procedure basis, not on the fundamental question of whether the exempted seeds are harming honey bees’.”