Plans to “loosen up” on coal industry regulations

Sen. Majority Leader Mitch McConnell won’t have President Barack Obama’s so-called “war on coal” to fight anymore, with Tuesday’s election of a new president who has called climate change a hoax and has promised to bring back lost coal mining jobs. 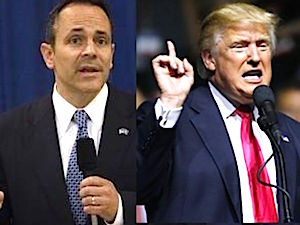 President-elect Donald Trump has pledged to “cancel” last year’s Paris climate agreement negotiated by 195 countries and to get rid of Obama’s Clean Power Plan in moves aimed at boosting a declining coal industry across Appalachia.

In the aftermath of Tuesday’s historic election, Trump’s coal, climate and environmental promises were welcomed by the coal industry and Gov. Matt Bevin, who said the U.S. Environmental Protection Agency wasn’t needed. But environmental advocates and others are stunned that the nation would elect someone who they see as putting a warming planet in peril.

U.S. Rep. John Yarmuth, D-3rd District, who has a 93 percent lifetime score with the League of Conservation Voters, called Trump’s environmental ideas “alarming,” including threats to stop funding climate science and relaxing rules on surface mining in the mountains.

“I think there are a lot of things Trump talked about that he is not going to do,” said Yarmuth, who was elected to a sixth term Tuesday. “But my guess is that the environment is one of those he will try to follow up on. What he can reverse, I suspect he will reverse.”

McConnell encouraged Trump to do just that. “The war on coal is not a result of any legislation we passed here (in the legislature),” the Kentucky senator said at a press conference. “One of the things I hope this (new) president will do is look at unilateral actions and regulatory overreach … (and) see how much he can undo. Coal is a good example of that.”

Kentucky remains the nation’s third leading coal producing state, even though the coal industry in Kentucky has been sharply diminished. The state’s coal production declined from 121 million tons in 2008 to 61 million tons last year, while employment fell from 17,670 jobs to 9,493. Coal dominate electricity generation in both Kentucky and Indiana, which is also a coal mining state.

But in the election’s aftermath, it was also unclear just how many of those thousands of lost coal mining jobs will ever return, especially in eastern Kentucky, which has been hit harder than western Kentucky. Coal will still have to compete with cheaper, cleaner natural gas, and Trump has also said he wants more natural gas developed.

The acting president of the Kentucky Coal Association, Nick Carter, acknowledged that what’s largely left of eastern Kentucky coal is in “thinner, dirtier seams farther away from transportation,” making it more expensive and less competitive. Mining jobs there “are not coming back tomorrow, and many of those people have left,” Carter said.

Climate change didn’t come up much in the campaign. But the Associated Press recently asked 21 risk experts to analyze the presidential campaign and list what they consider the five biggest threats to the world. Climate change topped the list with 17 mentions, often as the top threat. It was followed by use of nuclear weapons, pandemics, cyber attacks and problems with high technology.

Washington attorney Jeff Holmstead, a former air pollution chief at the EPA under President George W. Bush, said Trump will be under a lot of pressure “to revisit” the Clean Power Plan, which gives each state goals for curbing heat-trapping emissions from power plants. It’s a cornerstone of Obama’s climate policies and it soon could be overturned by the courts in a suit brought in part by Indiana and Kentucky.

If that happens, a Trump administration could let it die without further appeal, Holmstead said. Or the EPA could go through the rule-making process to get rid of it, which would then likely face a legal challenge by environmentalists, he said.

Holmstead, with the law and government relations firm Bracewell, said he doubts Trump will want to “take on the international community” and withdraw from the Paris agreement. Instead, he said Trump could “simply not pay attention to it.”

Louisville attorney Randy Strobo, who teaches environmental law at Bellarmine University, said he’s not sure what Trump will do. “You can only take what Trump says with a grain of salt,” he said. But he said he expects any Trump efforts to reverse Obama’s environmental regulations will face a lot of opposition from a public that increasingly understands the environment and economy go hand-in-hand.

“I am very, very disappointed,” said environmental engineer Sarah Lynn Cunningham, a director of the Louisville Climate Action Network, which advocates for public policies to reduce carbon pollution. “We are on borrowed time already,” she said, echoing warnings from climate scientists. “We cannot afford to do nothing for the next four to eight years.”

She said she fears that the United States pulling out of the Paris agreement will give other countries permission to do the same, resulting in even more greenhouse gas emissions, she said.

Yarmuth wondered whether Trump might soften his position when he learns more from the U.S. military during national security briefings. “The Pentagon has been very clear that climate change is a national security threat,” Yarmuth said. “It’s conceivable that when he actually has to start making decisions instead of taking about it, he will have a change of heart.”

Yarmuth also said that even though the Clean Power Plan is in jeopardy, “to a certain extent (its) impact is already cemented in.” Utilities have been making decisions on how to comply with those rules, including switching to natural gas, “and they are not going to reverse those decisions and say we are going to go back and burn coal,” Yarmuth said.

Kentucky Gov. Matt Bevin weighed in during a radio interview. Bevin said he hoped Trump will take a sharp knife to the EPA, which makes sure states equally enforce laws such as the Clean Air Act and Clean Water Act.

“Nothing would make me happier than to see his administration say, ‘You know what? We’re going to gut the EPA.’ The EPA is not needed at the federal level,” the governor said on WVHU Radio. There’s not one state in America that wants dirty water and dirty air for its people. Not one. We’ve got the ability to implement, we’re already the ones that enforce all the action at the state level.”