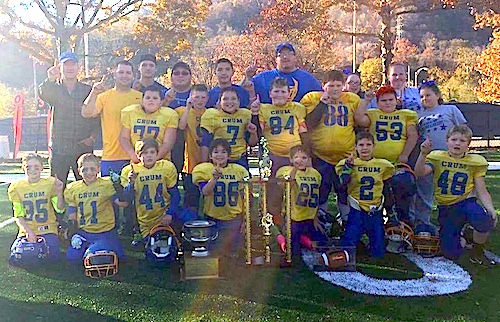 Logan, W. Va The Crum Mountaineers ( 10-1 ) avenged their only regular season loss with a 34-14 victory in the Southern West Virginia midget league championship over Tug Valley on Sunday afternoon at Logan Island stadium.

After a scoreless first quarter Crum dented the scoreboard with a Parker Watts 20 yard touchdown run after defensive stop Brayden Mollette plowed his way into the end zone and Watts tacked on the two point play to make it 14-0 Mounties. Tug Valley would score on a touchdown pass to make it 14-6 at Halftime.

In the 3rd quarter Tug Valley would tie it up at 14 before Crum busted the game wide open scoring the last 20 points of the game. Watts busted open a 63 yard TD run, Kaden Johnson scooted in from 17 yards out and added a two point run, Mollette would put the finishing touches on a championship with a 10 yard run.

The ‘B’ team which is made up of 8-9 year olds capped off a great season with the decisive victory over their neighbors to the south.

“… I think the loss to Tug Valley in the regular season really motivated our kids and brought theM back down to earth a little.” This group is amazing and we are so proud of them.”