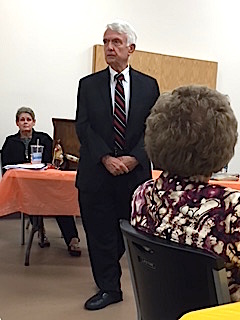 The October 25, 2016 meeting of the Louisa Chapter of Daughters of the American Revolution included an informative lecture by local attorney Eldred “Bud’ Adams who is an authority of such on 11th U. S. President (1845-49).

Adams has studied Polk intensely since law school, he says.

“He entered politics as a young lawyer and while serving in the state legislature, he became friends with Andrew Jackson.”

“I could talk for hours on this subject,” Adams said. I appreciate your invitation to speak about President Polk. He was truly a remarkable man and president.”

He answered several questions after the half hour lecture. 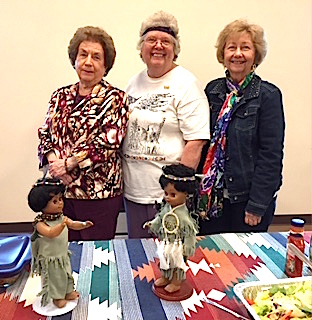 State and district regents, and officers who attended the September meeting said they were impressed with the work and the community activity of the Louisa Chapter, regent Mary Ellen Reid of the Louisa chapter said.

“They were impressed with the DAR library in the Riverview Building and said it was one of the best in the state,” Ms. Reid said.

The Hostesses- Dorothy Copley, Lynette Chaffin, and Nancy Bush prepared and served a light meal. Everyone is reminded of the Christmas Dinner on Friday December 9, 2016 at 6:00pm at the library. Money needs to be turned in by Dec. 5 so the caterer will have a count on how much to prepare.

The next meeting of the Louisa DAR is Tuesday, Nov. 22 at 6:00pm at the conference room of the Lawrence County Library.

Charter schools most likely a legislative priority for Republican-controlled chambers