Central Appalachian coalfield voters explain votes for Trump; some are skeptical he can help 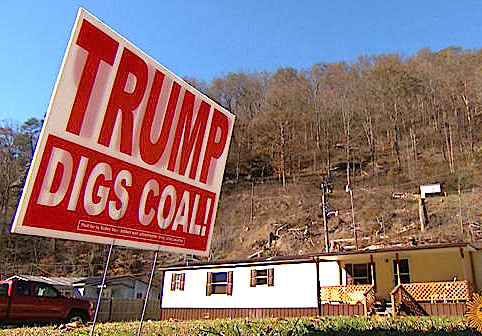 With Donald Trump’s rural landslide being one of the difference-makers in Tuesday’s election, major news outlets dispatched reporters to rural areas to explain their voting to the rest of the nation. Ted Koppel, senior correspondent for “Sunday Morning” on CBS, and Gregory Schneider of The Washington Post both went to the depressed Central Appalachian coalfield.

Koppel went to McDowell County, West Virginia, which Trump carried almost 4 to 1. Sheriff Martin West, a former miner, told him, “I think he can help us. . . . The people is counting on that in order to feed their family, to pay their bills and obey the regulations that we have. But they keep putting more regulations upon us.” Trump pledged to bring back coal jobs but didn’t say how.

Another former miner, African American Leroy Johnson, said he voted for Hillary Clinton “because she was more experienced and she was talking about more of the policies that we need, and the things that we need to work on. Donald wasn’t talking that. He was just throwing words out there, giving people what they wanted to hear. And I didn’t think that was right.” But an unnamed Trump supporter told Koppel “I think he can do anything he said he could do. He’s that good.” (Read more)

Schneider went to Coeburn and Lebanon, Va., whose counties gave Trump 80 and 78 percent of their votes. Juan Lopez, 42, said he came from Mexico to the U.S. in 1991, became a citizen and had two children. He works for a company that hauls coal but has idled most of its trucks, and said he voted for Trump to keep his job. “They say if Trump can do it better [with the coal industry], we might be able to have jobs two or three more years. But if not, we might be out by the end of next year.”

But there was much doubt from retired miner William Sisk, 78, of Buchanan County, which gave Trump the highest share of vote in any county during the primaries, 91 percent. “A lot of people talk about Obama’s war on coal, but the coal war was on long before Obama got there. The bottom dropped plum out when he got in there and he got all the blame for it. But I don’t think it’s ever going to come back.” Sisk said he didn’t vote, saying of Trump, “He’s too radical. He promised too much. You can promise anything, but you got to deliver.” (Read more)

James B. Mosley, 72 of Catlettsburg, KY