Kentucky Needs Your Help During Its Wildfire Emergency 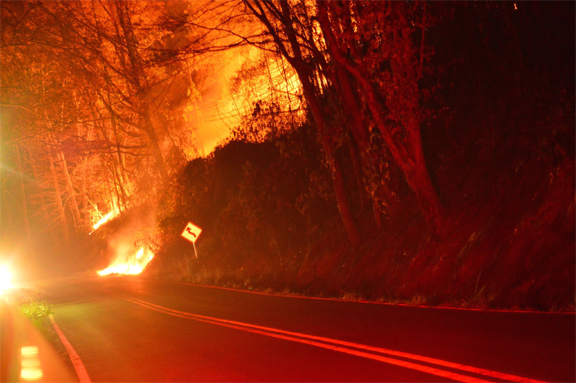 FRANKFORT, Ky. (Nov. 11, 2016) – On November 3, Governor Matt Bevin declared a State of Emergency in Kentucky due to the numerous wildfires burning, mostly in southeastern Kentucky.

While October is normally a dry month in Kentucky, this month has seen very little rain, leading to a drought declaration this week. Woodlands are extremely dry. And as the drought is expected to worsen, with no rain in the immediate forecast, the fire situation remains serious.

To date, there have been 210 fires, with approximately 33,000 acres burned. Most of the fires have been in five counties: Harlan, Knox, Clay, Perry, and Letcher. Sixty-nine counties have issued burn bans.

For more than two weeks, the Kentucky Division of Forestry (KDF) has been battling the wildfires. As of Friday November 11, the KDF is managing 25 active wildfires, with 385 deployed personnel.

One hundred thirty-six volunteer firefighters from thirty-two stations across the state have joined the fight through the efforts of the Kentucky Fire Commission. KDF has used them to protect structures.

All these responders, and the volunteer firefighters who have joined the effort, are doing a magnificent job in keeping the fires contained thus far. But we can’t do this alone.

This weekend, modern gun deer season begins and we urge hunters to contact their local fire department or county officials, or go to KDF’s Facebook page at https://www.facebook.com/Kentucky-Division-of-Forestry-261039753930985/?fref=ts to learn their county’s burning ban status. Burn bans prohibit all outdoor burning, including campfires.

If a county does not have a burn ban, hunters must still abide by the fire hazard season burning restrictions. Outdoor burning is only permitted between 6 p.m. to 6 a.m., within 150 feet of the woods, and fires must be monitored at all times.

The Kentucky Department of Fish and Wildlife (KDFW) also is urging hunters in Kentucky’s woodlands to report any wildfires or suspicious fire-related activity by calling the Poaching Hotline at 1-800-25-ALERT (1-800-252-5378).

Sadly, some of these fires are being deliberately set. Of 210 fires fought since late October, 159 were judged to have been caused by arson. That’s 76 percent. In the past week there have been two arrests for arson and one for ignoring a burn ban. Arsonists put your lives and property and firefighters’ lives at risk. Arson will not be tolerated and those who set fires will be prosecuted to the fullest extent of the law.

I join Gov. Bevin in urging all Kentuckians to help us with this effort. First, be safe. Avoid fire or smoke situations. Abide by all burn bans and fire-hazard burning restrictions. Take extra care in and around areas that have recently burned. On smoke-filled roadways, drive with your lights on and use caution. Second, be extremely cautious in all outdoor activities. Third, if you see something suspicious, report it.

You can make a difference. Together, we will create a fire-safe Commonwealth in the coming days and weeks.

Growing up in Louisa – CASH TRAIN