Hundreds yell ‘no to Trump’ in downtown Louisville rally 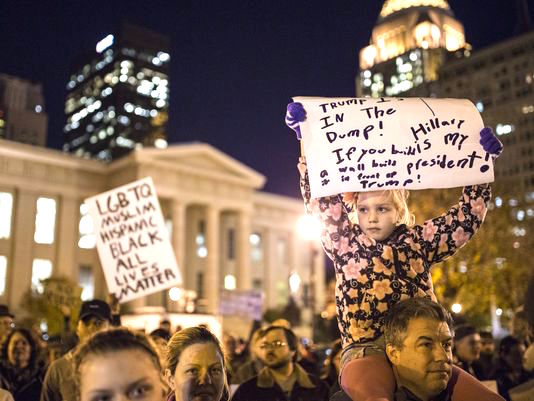 Carrying signs that said “Not My President” and “Make America Smart Again,” the raucous crowd marched peacefully through much of the central business district.

Rebecca Rose of Anchorage said she is “terrified” for women, minorities and immigrants.

“The power of hate sunk my heart,” she said. “He wants to build a wall and put that much time and energy into racism.”

“They have nothing to fear,” Kluismeier said. “They have the same rights as everyone else.”

The four-hour demonstration – dubbed “Not My President, Say No To Trump, Say No To Racism” – took place in front of the Jefferson County Courthouse but encircled the Hall of Justice, Louisville Gardens and went through 4th Street Live where demonstrators also chanted “black lives matter.”

The protest took place on the same day Trump visited President Barack Obama at the White House for the first time as president-elect.

During the Thursday protest, the diverse crowd swelled to more than 500 with many chanting against Trump’s victory. Following the march, the protesters reconvened in front of the courthouse, backed by the illuminated clock tower and Mercer Building rising out of the Louisville skyline. Someone at the center of the circle started a rally cry of “Love trumps hate!” A man wearing an Orlando Pride shirt stood at the front of the crowd, emphatically nodding in agreement. School age children joined in the chants alongside their parents, one little boy even brandishing his own “Not My President” poster.

Tamara Langman of Pleasure Ridge Park carried a sign telling Trump to keep his hands off her genitals. She said it is unspeakable that so many women supported him.

“I guess there’s a lot of women who don’t see things the way I do,” she said

Across the country, thousands have participated in anti-Trump demonstrations that have taken place in at least 10 U.S. cities. Most have been peaceful assemblies to voice concern about Trump’s win over Democrat Hillary Clinton.

Mallie Feltner, one of the organizers of the Louisville protest, said she organized the event with others to show solidarity with those who “feel targeted, hopeless, angry and scared” because of the election results.

“I hope today we can begin to restore some of the hope that was taken from us by giving people things they can do, organizations they can support and communities they can find solidarity in, even in Kentucky,” she said.

Trump won Kentucky by roughly 575,000 votes, and it was the first state officially called for him on election night. Some local leaders said Thursday they were troubled by what the real estate mogul’s ascension to the White House means about the country’s race relations and future.

During the campaign, Trump made several comments aimed at immigrants, Muslims and other minorities that were deemed offensive, including massive deportation plans and defending the New York Police Department’s stop-and-frisk tactics.

Among the most controversial was a call by Trump in December 2015 for “a total and complete shutdown of Muslims entering the United States.”

Muhammad Babar, head of the Louisville-based Muslim Americans for Compassion, said he feels “Islamophobia” is on the rise because Trump won.

“We have never faced this much stress, anxiety and anti-Muslim feelings within the community at-large, even after the tragedy of 9/11,” Babar said.

Over the summer, the Trump campaign backpedaled on the Muslim ban and instead emphasized suspending immigration from terror-prone regions.

That has done little to assure people like Babar who worry verbal and physical attacks against Muslim Americans will accelerate during the Trump administration.

“We are afraid that we will face more profiling and there will probably be more scrutiny in the coming days,” Babar said.

The Rev. Kevin Cosby, senior pastor at St. Stephen Baptist Church, the state’s largest African-American church, said those who believed America was a post-racial country were proven wrong on Tuesday.

“Obama ignored racism to advance his policies now racism will be in power and reverse his policies,” Cosby tweeted Thursday afternoon.

But Klusmeier, who is a Fern Creek insurance salesman, said what attracted him to Trump was his blunt speaking style on fixing trade deals, illegal immigration and terrorism.

“I hate political correctness,” Kluismeier said. “People get their feelings hurt all the time … and I feel like so much of what the liberals want is to silence political dissent and Trump cut through that.”

Klusmeier spent thousands out of his own pocket to open a Louisville office for young professionals who supported Trump. Asked if minority groups should be worried given Trump’s remarks during the Republican primary and general election, he said the media and others took much of what Trump said out of context.

“I never once thought Trump wanted to ban all Muslims,” Kluismeier said.

In reaction to Thursday’s protest, Jefferson County Republican Party Chairman Jim Stansbury said, “We should all respect the electoral process.”

Those who joined the demonstration said they were stunned at the results but this protest is the start of the resistance.

“I was nauseous, couldn’t sleep like I was in a nightmare,” said Judy Calloway, an Army veteran who lives in Newburg. “He’s abusing people, using black people and trying to hurt minorities and people with certain religious preferences. It’s time for action.”

The extreme rhetoric surrounding the election has lead many to adopt an “us vs. them” mentality. Sarah Pett, carrying a “Black lives matter” sign, said the protesters do not mean to alienate others by standing up for the rights of minority groups.

“I think it’s really easy right now to lose sight of the fact that we’re all on the same team,” she said. “We’re not really asking anyone’s lives be drastically changed. We’re just asking to exist and to have the same rights as everyone else, and no one has to lose anything in order for that to happen.”

Kentucky Needs Your Help During Its Wildfire Emergency