Level I Drought Declaration issued for most of state; Drought viewer provided 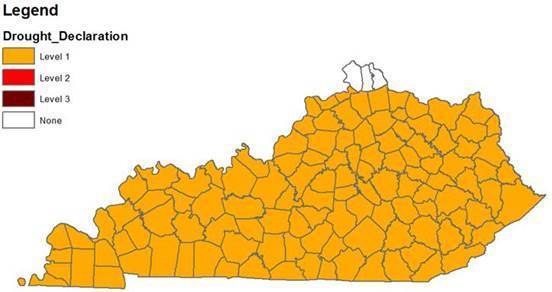 FRANKFORT – The Office of the State Climatologist and the Kentucky Energy and Environment Cabinet, in coordination with the Kentucky Drought Mitigation Team, are issuing a Level I drought declaration for 117 counties in Kentucky.

The public should be aware that drought conditions do exist and if conditions continue they may be asked by their water system to conserve water. Local community water systems, especially those with drought vulnerable sources, should re-familiarize themselves with their water shortage response plans and local officials should meet to discuss how they will proceed if they do need to ask citizens to conserve water. Also, water systems should contact the Division of Water immediately if at any time they feel their water supply is getting low.

Widespread dryness and unseasonably warm temperatures have caused a rash of wildfires that have consumed more than 29,000 acres in the eastern half of the state, as well as a few fires in the west. Six Blackhawk helicopters from the Kentucky National Guard have dropped 306,000 gallons of water on the fires, but new fires have started daily. As of Wednesday, there were 27 fires being managed or monitored. More than 60 counties have issued burn bans as a result of the wildfire activity and drought conditions.

Drought has already had an effect on agriculture operations. Cattle producers have already begun to feed hay, as pastures have suffered due to the lack of rain. Because the spring and summer seasons were wet, hay is neither plentiful or of particularly good quality, putting additional pressure on herds.

Further, crops like winter cover wheat are struggling to get out of the ground or to germinate due to the dry conditions, putting producers at risk for soil erosion over the winter months. Stock ponds are significantly lower than typical for this time of year, which could result in these ponds freezing during the colder winter months.

Statewide, public water supplies are not seriously affected at this point but persistent drought conditions will increase the risk of water shortage conditions, especially for those systems relying on small lakes, small headwater streams and wells located in localized fracture-flow aquifers.

Low water levels in lakes can also lead to deteriorating water quality issues that could make the water difficult to treat. All water systems relying on small lakes, localized aquifers and lesser streams should begin to monitor their water sources on a routine basis and consult their local water shortage response plans for guidance on dealing with potential water shortages.

Short-term forecasts show continued dryness for most of the state. No significant rain is expected for the next week, and widespread light shower activity on Nov. 8 did little to alleviate the situation.

The Kentucky Division of Water will continue to monitor all of the state’s water systems and their sources of supply and notify the public of any changes that may lead to water shortages.

More information about drought declaration criteria can be found in the Kentucky Drought Mitigation and Response Plan at http://water.ky.gov/wa/Documents/State%20Plan_Final.pdf.