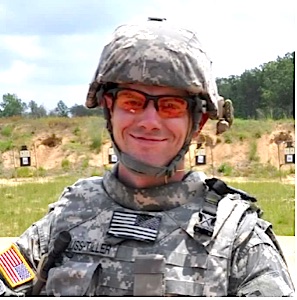 “In the celebration of our Veteran’s Day one of Lawrence County’s very own, SFC Matthew Sluss Tiller is being honored in several different arenas for his ultimate sacrifice ”

SFC Matthew Sluss-Tiller, was born February 14, 1974 and he always knew that he would join the military, and his mother Jane Blankenship (a teacher at LCHS) signed for him to join at the age of 17. In 1993 he graduated Lawrence County High along with his high school sweetheart and went straight into active duty stationed at Ft. Bragg, N.C.. While in active duty, he was deployed to several places such as Iraq, Afghanistan and Pakistan.

The story didn’t end there, Melissa, his high school sweetheart eventually gave birth to a daughter, Hannah. Along with the love of his country, he loved his daughter and Melissa more than anything.

Seven years ago on Nov. 2, 2009 Matthew left on his last deployment. Headed to Pakistan, no person could know that it would be the last time he would hug and kiss his family good-bye. SFC Matthew Sluss-Tiller was killed in action on February 3rd, 2010. The circumstances surrounding his death are classified but with the amount of awards and medals there is no doubt that he died a very decorated soldier and fought a heroic fight until the end.

Some of the medals acquired during his 19 year career were MERITORIOUS SERVICE MEDAL, ARMY COMMENDATION MEDAL, JOINT SERVICES ACHIEVEMENT MEDAL, MULTIPLE BRONZE STARS AND THE PURPLE HEART. He was a dedicated, strong, and honorable soldier that lived by the soldier’s creed. He has been recognized by the U.S. Senate, The House of representatives and even President Barack Obama on C-Span. 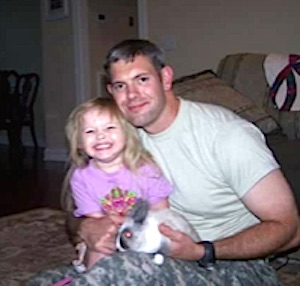 He was so much more than a hero in the field, he was a wonderful husband. He was a father of a three year old daughter that has grown into a beautiful 10 year old. His legacy lives on through the ones he left behind. His wife, Melissa Sluss-Tiller, his daughter Hannah, his parents and step parents who were originally from Martin Co. His father Edward Tiller and wife Avonne. His mother, Jane Blankenship and her husband, Forrest Blankenship.

“I’m just lucky enough he chose to love me, I wouldn’t change any part of my life with Matthew I would do it all over again even knowing that I would continue my life without him, without him physically holding my hand he made me strong, brave, fearless, he made me live and grow in ways as a person I never knew possible and that I will teach to my Hannah. We are fierce and mighty, God loves us so much,” Melissa said.

Veterans Day is upon us and the family has already attended two events honoring Matthew. One special day at Churchill Downs where they sat in the Millionaire’s Row,

And coming up on the 12th of November, the Carolina Panthers will honor several fallen heroes along with Matthew for a Veteran’s Day Celebration. The players will wear the name of SFC Matthew Sluss-Tiller on their helmets and jerseys. Each family will get to meet the player they have been matched up with. Matthew’s daughter will meet the players and receive a goody bag from the team.

Not all Veterans make the ultimate sacrifice as this family has, however it is SO very important to be a part of any celebration in order to show how much we appreciate the sacrifice they made so that we can live the life we live, in a free land. 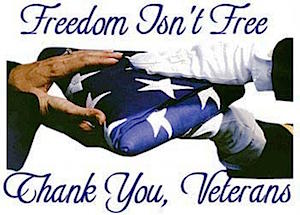