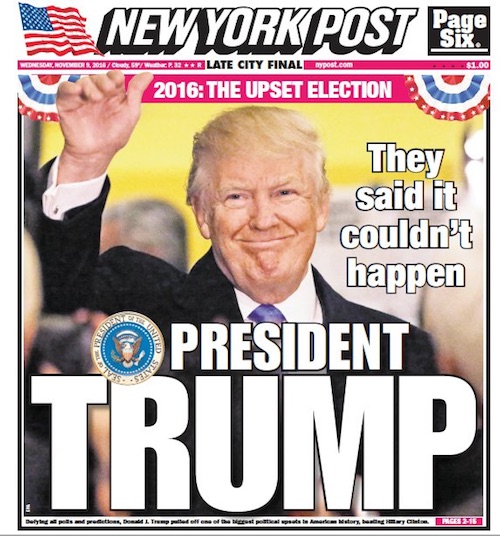 In what perhaps has become the moment stunning political moment in our country’s history, and maybe even our planet as a whole for that matter, Donald J. Trump, a wealthy real estate developer businessman/part-time actor turned reality TV star, who never has served in the military or held political office, has been elected our next Republican President of the United States. Trump, 70,  having defeating his favored opponent according to the vast majority of polls, Hillary Clinton, a former First Lady turned U.S, Senator turned 2008 presidential candidate turned 4 year Secretary of State for Obama, before winning the Democrat nomination this year.

Or to put it in more simple terms, America had two choices: CRAZY or CROOKED. And America decided for CRAZY. And it was because Hillary was more crooked than a pair of midgets trying to ride an angry mountain goat with cataracts that was tricked into drinking hard mash liquor just before his unexpected rodeo ride by a couple of Snow White’s party buddies.

And speaking of potent alcohol drinks, I would write more about Trump’s unbelievable win, but I am having increasing trouble in doing so, for in celebration of this gigantic victory moment, ( I voted for Trump, even though I am a registered Democrat, because, hey, crazy goes for crazy); for the first time in 20 years, your’s truly is ‘hammering’ the night away, as I am getting doused in a good feeling on the consumption of both (legally bought) blackberry AND blueberry moonshine.

So, instead i will leave you the official vote tally for Lawrence County and our surrounding area: