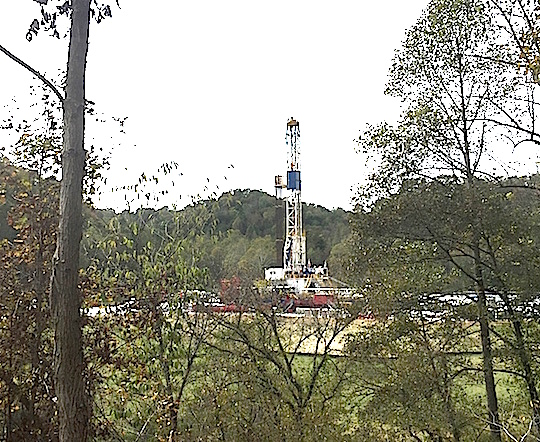 Faced with the choice of shutting down the county’s government services or coming up with more revenue, the Letcher County Fiscal Court is looking for ways to deal with a projected budget deficit of $1.3 million before the current fiscal year ends at the end of June.

The fiscal court held a special meeting last week to begin to address the deficit caused by severe reductions in severance tax revenues for coal and natural gas. The county’s latest budget outlook calls for the receipt of $6,655,151 in operating funds by June 30, while the 2016-17 debts are expected to total $7,980,705, a shortfall of $1,325,554.

Letcher Judge/Executive Jim Ward told the members of the fiscal court there are four ways to address the budget deficit, one of which is a shutdown of county government, which he said is not practical. The other three involve coming up with new revenue. Fifth District Magistrate Wayne Fleming said that most fee plans, such as a franchise fee on electric bills, would simply be passed on to rate payers and would just hurt low-income people at a disproportionate rate. County Attorney Jamie Hatton said there are already a lot of fees attached to electric bills and agreed that any further fees would be passed on to customers. Fleming said that very few fees of any sort are not passed on to consumers. Judge Ward said it is his belief that nobody on the court wants to raise taxes either.

Magistrate Fleming said this court and others should have planned better to use severance tax funds for the purpose they were originally set aside for, that of economic development, but it had been the same with Revenue Sharing in the 1970s and 80s, the money had been used for other purposes. Fleming said the money was spent on projects to help the people, but that now it’s gone.

Ward told the court that a tax on insurance premiums will only provide around $600,000 to $700,000, based on a similar tax in Bell County, which is similar in population. A tax on bank deposits that was collected in the past was also mentioned, and County Attorney Hatton said he would do some research to see why it is no longer collected and if it can be revisited. Judge Ward said that left an occupational tax, about which none of the court members spoke favorably. Ward said an occupational tax would address the deficit and he was not in favor of it either, but according to his projections, a one percent occupation tax for the county would raise $1,537,510 per year.

“Just because I raised this, I want to make it clear, I am not for it,” said Ward. He said it was his job to present options to the court and that was what he was doing. He added that from information he has received from state sources, if citizens of a city are paying an occupational tax for the city, a county occupational tax would be added to their tax burden, so for those paying 1.5 percent in their community, a one percent county tax would increase their overall occupational tax to 2.5 percent. Ward added that even if the fiscal court did assess an occupational tax it would be a while before it would have an impact. Fleming said that it looked like anything the court did would have an adverse effect.

Ward showed the magistrates information on another possible revenue source he had found, that of a licensing fee on oil and gas wells in the county of $1,000 each. Ward said that according to the Kentucky Energy Cabinet’s Division of Oil and Gas, county governments have a right to assess a licensing fee on each oil and gas well in their county limits and that with 1385 gas wells, 14 separate oil wells, and 91 combined oil and gas wells in the county totaling 1,490 wells, the annual income from the fee would amount to $1,490,000.

Fleming called the proposal a “no-brainer,” providing that it would not in some way be passed back on taxpayers. County Attorney Hatton said that that proposal would also take a while and would inevitably be held up through litigation by the oil and gas industry. Ward replied that the state allows county governments to assess a license fee and that even if the gas and oil companies do fight it, he believes that Letcher County is within its rights to assess the fee. Fleming said he would much rather see the fee fall on the mineral industry than on low-wage workers and Ward said if the tax is implemented, Letcher County will be the first to use it. Fourth District Magistrate Keith Adams made a motion to begin work on an ordinance to assess the license fee on oil and gas wells in the county and Third District Magistrate Woody Holbrook seconded it. The vote to proceed was unanimous. Hatton said the industry and its lobbying group would be bound to oppose the fee, and Ward said a lot of work had gone into trying to figure out a revenue source and that he would still like to see about a bank deposit fee as well.

“It’s time to think outside the box,” said Ward.

Judge Ward’s office later told The Mountain Eagle that the county derives its authority from Kentucky Revised Statutes section 67.083, which is part of the section that lists the powers given to fiscal courts.

“Section 083, Additional powers given to Fiscal Courts”, states that “(1) It is the purpose of this section to provide counties as units of general purpose local government with the necessary latitude and flexibility to provide and finance various governmental services within those functional areas specified in subsection (3) of this section, while the General Assembly retains full authority to prescribe and limit by statute local governmental activities when it deems such action necessary. (2) The fiscal court of any county is hereby authorized to levy all taxes not in conflict with the Constitution and statutes of this state now or hereafter enacted. (3) The fiscal court shall have the power to carry out governmental functions necessary for the operation of the county. Except as otherwise provided by statute or the Kentucky Constitution, the fiscal court of any county may enact ordinances, issue regulations, levy taxes, issue bonds, appropriate funds, and employ personnel in performance of the following public functions: ((h) Conservation, preservation and enhancement of natural resources including soils, water, air, vegetation, and wildlife; (m) Regulation of commerce for the protection and convenience of the public; (x) Promotion of economic development of the county, directly or in cooperation with public or private agencies, including the provision of access roads, land and buildings, and promotion of tourism and conventions.)“

In other business, Ward announced that a state of emergency has been declared by both the fiscal court and the Fleming-Neon City Council concerning that city’s water emergency. Ward said the Letcher County Water and Sewer District would do all it could to help Fleming-Neon and that lines from water tanks at Deane had been opened and the county would pump water to the city when connections were complete.

Ward also told the court that Tractor Supply, which plans to put one of its specialty stores in the old Food World site in the Walmart Shopping Center at Whitesburg, wants to lease the land around the vacant Ermine Senior Citizens building for an outdoor storage site.

Ward said the company wants to do a long-term lease for 20 years at $1,000 per month. He said the building would not have to be demolished and the new store should create between 20 and 30 jobs.

Ward said he had met with representatives of Tractor Supply on November 4.

County Attorney Hatton told the court it might be in the county’s best interest to enter into a shorter-term lease because the property is well located and property values may go up. Ward said the matter can be settled in negotiations with the company, and the court voted unanimously to authorize Hatton to start work an ordinance to enter the lease.