“Some armed militia groups are preparing for the possibility of a stolen election on Nov. 8 and civil unrest in the days following a victory by Democrat 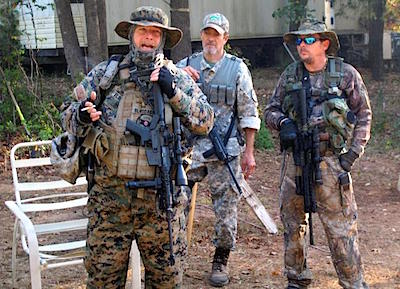 Three Percent Security Force, a militia group training in Jackson, Ga., “say they won’t fire the first shot, but they’re not planning to leave their guns at home, either.”

Chris Hill, a paralegal who goes by the code name “Bloodagent,” says he admires Donald Trump’s “promise to deport illegal immigrants, stop Muslims from entering the country and build a wall along the Mexico border,” Mitchell and Sullivan write. “Trump has repeatedly warned that the election may be ‘rigged,’ and has said he may not respect the results if he does not win.

At least one paramilitary group, the Oath Keepers, has called on members to monitor voting sites for signs of fraud.”

Reuters reports that the Southern Poverty Law Center, which tracks extremist groups, estimates there were 276 active militias last year, up from 42 in 2008.