Bevin declares state of emergency in support of wildland fires, and poisonous snakes 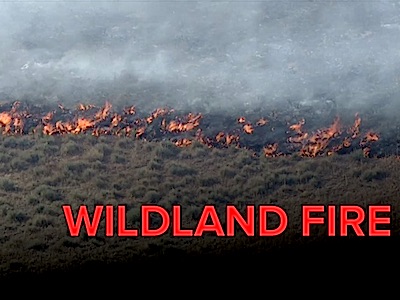 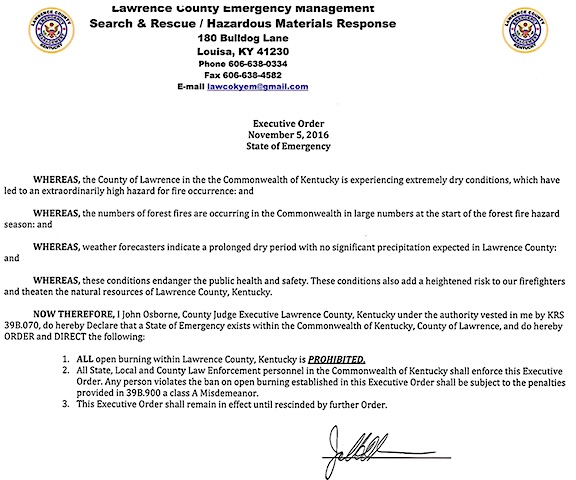 Kentucky Emergency Management Director Michael Dossett has activated the State Emergency Operations Center in support of the Kentucky Division of Forestry to provide situational awareness and command and control for state assets as requested by Forestry and by county officials and first responders in the impacted counties.

“My primary concern is safety. By declaring a state of emergency we are providing emergency resources to proactively respond to local needs. I thank all of the officials working hard to keep people safe,” Bevin said in a statement. “As dry conditions remain throughout Kentucky, we urge all citizens to use extreme caution during outdoor activities and refrain from outdoor burning.”

“It is imperative that we support our first responders as they combat wildfires throughout the state,” said Dossett. “By virtue of the executive order, allied state agencies are now able to provide resources that are beyond local government capabilities.”

“The state sent out a request last night of each counties available resources in case they need to be deployed elsewhere in the state. Right now south central ky especially Harlan County seem to be the worst hit.” Lawrence County EMS director Mike Woods said.

Harlan County Judge Executive Dan Mosley said, “I appreciate the Stat’s help in this situation. Our crews have been fighting this battle for several days. Their assistance will expedite our efforts.”

Department for Natural Resources Commissioner Allen Luttrell said employees with the divisions of Mine Safety and Mine Reclamation are working with the Division of Forestry to aid in the fire suppression effort.

“We are moving fire crews and strategically deploying department employees to bring every resource to bear on these fires,” Luttrell said. “We ask the public’s help by observing any local burning bans.”

At this time there have been no reports of injuries, evacuations or house fires associated with the wildland fires. WYMT reported that the following counties had put burn bans in place: Breathitt, Floyd, Harlan, Laurel, Leslie, Letcher, McCreary, Owsley, Perry, Pike and Whitley.

State officials are also monitoring social media and will use #KyWildfires to distribute updates.

By Brad Bowman
The State Journal

The Kentucky National Guard mobilized two UH-60M Blackhawks and one LUH-72 Lakota helicopter. According to Maj. Steve Martin, the Blackhawks will supply direct firefighting support with 600-gallon water buckets and the Lakota helicopter will provide command and control support from the air.

Martin said the aircraft will initially go to Harlan and Hazard counties, where the worst fires are occurring. Twelve Army National Guard pilots will work directly with the Division of Forestry and will assist until the mission is deemed complete.

Jennifer Turner, a spokeswoman for the Division of Forestry, said she has joined personnel at the State Emergency Operations Center in Frankfort for situational awareness and support.

The Division of Forestry reported 38 active fires that had burned 3,800 acres in the region, but Turner said more fires started Thursday.

“We’ve got at least 17 new fires to add to the list today,” she said. “Currently, five are unmanned, which means we haven’t been able to get crews on them yet. Ninety percent of our fires are human-caused, and the majority of those are arson. Twenty of the fires yesterday were deemed arson and three were debris.”

Kentucky Department of Fish and Wildlife game wardens and two bloodhound crews from the Department of Corrections are investigating in the woods where they have leads on several fires, Turner said.

Turner said the new fires were located in Floyd, Harlan and Pike counties. At the request of Harlan County Judge-Executive Dan Mosley, Department for Natural Resources Commissioner Allen Luttrell sent employees from the Divisions of Mine Safety and Mine Reclamation to check on residents in the Clover Lick area located between Pine Mountain and Black Mountain.

Turner said those employees went to homes and asked residents if they had any respiratory complications from smoke or needed assistance getting to shelter Moseley had made available to county residents affected by the fires.

State Rep. Fitz Steele, D-Harlan, started a committee meeting in the Capitol Annex Thursday thanking Energy and Environment Cabinet Secretary Charles Snavely and other officials for the fast response to the eastern part of the state.

“I was in Harlan County yesterday on Pine Mountain. It was terrible. People are scared,” Steele said. “To my last report, there were over 1,300 acres of Pine Mountain on fire. There were fires all over eastern Kentucky. I was told yesterday Pike County dismissed schools because the smoke from the fires was so bad.”

Near the back of Kingdom Come State Park, Steele said, people had left their homes.

“We need to thank our Division of Forestry and the people working out there right now. You know as well as I do, the copperheads and rattlesnakes haven’t denned yet. So now, we have people out there trying to fight fires and we have poisonous snakes on the move trying to get away from it (the fires). There’s more at risk to our firefighters than fire.”

Snavely said there were 32 fires Wednesday and crews extinguished 27, but the five largest fires remained active.

“One fire has gotten out of our fire lines and is getting beyond our capabilities — that’s when we asked to call in the National Guard,” Snavely said. “The fire situation isn’t as bad as it was in 2001 when this emergency was last enacted, but we’re trying to get ahead of it. We have had some roads that were about to be impacted, some highways that were about to be impacted and residences. That’s why we took action.”