KSP on lookout for men who escaped through AC vent 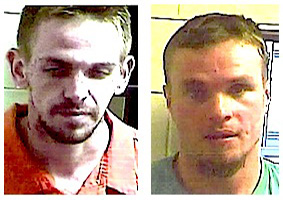 Anyone with information is that could help the investigation is encouraged to call their local law enforcement or KSP post 9.

Two inmates escaped from the Big Sandy Regional Detention Center yesterday 11-1-16, after assessing a service door in the ceiling of their cell and then proceeding to the roof and removing the ductwork from the air conditioning unit.

Melvin Scott Garland, 31 of Royalton Kentucky was being held on a bench warrant for failure to make restitution for Burglary 3rd from Magoffin County. Garland was sentenced 10-24-16 to 10 years in Morgan County Circuit Court for Burglary 3rd degree, Criminal Mischief 3rd, Persistent Felony Offender 1st and Theft by Unlawful Taking $500 or more but under $10,000. He also had a warrant for Receiving Stolen Property under $500 from Magoffin County, and a bench warrant for failure to pay as ordered on Possession of Marijuana from Morgan County.

The Big Sandy Regional Detention Center is currently on lockdown after the escape. Escape protocol procedures were implemented last night after the escape was verified by video surveillance. As of 9:12 AM this date the inmates have not been apprehended. Anyone with information as to their whereabouts is asked to notify the Kentucky State Police Post 9 or local law enforcement.