Ky. AMISH refuse to use ‘horsey bags’ to catch ‘droppings’ 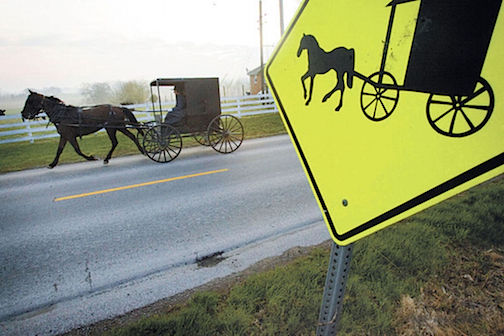 The court system in Logan County has seen a pile of court cases accumulate in which people are accused of violating a local ordinance in Auburn requiring large animals to wear collection bags to catch their droppings.

The common thread running through those cases and virtually every previously recorded ordinance violation over the last couple of years has been that the people being cited are members of Auburn’s Amish community.

Auburn officials have maintained that the ordinance is necessary to ensure that city streets remain clean and to reduce the risk of spreading disease.

Amish residents have argued that, in practice, the ordinance singles out their community, whose members use horses as their means of transportation.

Amish community members have not complied with the ordinance, citing concerns that attempts to put the bags on their horses might frighten the animals.

Meetings between community members and Auburn and Logan County officials have not resolved the conflict.

Several cases have been brought to trial, where guilty verdicts have resulted in some defendants being jailed for contempt of court for refusing to pay the fine for violating the ordinance. At least one case involving the ordinance, however, resulted in an acquittal.

Attorney Travis Lock this week filed a notice on behalf of the Amish defendants challenging the legality of the ordinance, arguing that the regulation is unconstitutional as it has been applied in Auburn.

“It’s being clearly designed to single out the Amish and, frankly, to discriminate against the Amish,” Lock said. “This ordinance was passed to target this particular group of Amish in the Auburn community and that in and of itself is unconstitutional and discriminatory.”

Logan County Attorney Joe Ross, who is prosecuting the ordinance violations, said that a challenge to the ordinance had been a potential next step if the current pending cases would not be set for trial.

“At least we know what direction we’re going and we’re not continuing without doing something,” Ross said.

Logan District Judge Kenneth Williams has set a schedule for the attorneys to file briefs arguing their respective positions, with a hearing scheduled for April 26 in district court to hear oral arguments.

“Hopefully we can get some sort of resolution shortly after the April date, but realistically there’s always other potential appeals after that,” Ross said.

Another potential avenue to resolving the conflict would be to file a lawsuit in federal court in Bowling Green alleging that the ordinance violates the civil rights of the Amish community, a step that Lock said he has considered.