A marketing ploy of the mid-forties, fifties and into the sixties were a number of ‘free’ gimmicks used by retailers to increase loyalties to stores, and in some cases, specific brands. A common method to ensure the customer would return was to put an item such as a washcloth in a box of suds, or a plate or saucer from a dish set in oatmeal, or some other bulk product, that could be collected only by repeat purchases. For kids, it was common to include a toy prize, or premium in the box, such as in Cracker Jacks, or have the kids accumulate a number of ‘box tops’ to send in for a gift, such as a code ring, badge, and membership card. Since an extra price was not charged, they were perceived to be free gifts. It was pretty certain that we’d come back to buy more if we wanted to collect an entire matching set, or if we needed to collect more box tops.

A popular thing that roped in a sizeable part of the population was trading stamps. These were handed out by participating merchants in quantities matching the amount of sale on the complete purchase, thus bringing you back to the store. The customer would collect pages of stamps and paste them to make up several books to redeem for prizes of all sorts. I think it was Raleigh tobacco that put stamps into every carton that could be saved up and redeemed at a future time. I know I saved those for years, but never tried to redeem them. I wonder where they went?

Most of us will have a picture in our minds of those days of receiving S&H Green Stamps, or maybe another brand like Gold Bond. “Green stamp” collecting was an on-going and addictive practice and was very common in the day. As competition grew more stores issued these stamps. Store owners found to stay competitive they had to buy into the program, often paying hundreds of dollars to the stamp company for the books and stamps they would give out based on sales. 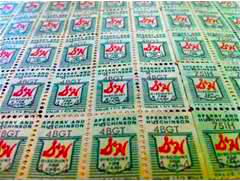 Some stores began to increase the number of stamps given for purchases, even doubling stamps on certain days of the week. This soon enough led the retail community into a kind of stamp war; maybe capitalism at its best. Anyway, some customer’s shopping habits switched from a personal loyalty to a given store to those establishments that gave more stamps for the purchase. Even stores that had not given ‘green stamps’ before found themselves having to hang the familiar green sign, “S&H Green Stamps” on their façade, or posting it on their windows or front doors.

The amazing thing is that the focus of many was more about how many stamps than it was the cost of the products being bought. Marketing done well often distracts consumers away from the really important to what is perceived to be important. Meat and dry good prices went up to cover the cost of those ‘free’ green stamps, and the consumer felt satisfied. Oh, well.

At my house it was a family affair when everyone would take pages of the little perforated stamps and paste them into the books freely provided by the stores. In the end we’d be amazed at how many books we had filled. Of course the purpose was to then see what we could get from the redemption center for that number. In several cases we had to make the decision to wait to get more pasted up to allow us to redeem them for a nicer item. This process mirrored life in that saving up ‘stamps,’ or dollars, had the same effect. If we wished to have something, then it meant we’d have to save up to get it. This, and a few games of monopoly would teach me a good deal about handling finances. Thanks, mom.

Everyone didn’t participate and save, meaning they either refused the stamps or tossed them. With some friends and neighbors, saving the stamps was more work than it was worth. I even stood at the counter at Bradley’s Grocery and watched customer after customer wave off the stamps when they were offered. The silly thing is that they had already paid for them in the price of the groceries. The ‘profit’ went to the store.

The only person in my family that took any interest in saving green stamps was my mother. I remember her asking family members who were returning from the store whether they had some green stamps for her collection. It got to the point that mom insisted they not shop at stores that didn’t give stamps! I know that some stamps went into the trash only to have mom go through and fish them out. I took note that she was keen to fill books with these loyalty incentives, so I was on the lookout for opportunities to rescue them and present them to mother. I figured that anytime I could make points I’d better do it. After all, I’d likely be in trouble later in the day and needed to stay in her good graces.

I don’t know if anyone considered giving stamps to charity, but if enough people dropped them into a charity box at church some good may have been done for the needy. I do remember once when I was very young that a neighbor gave me several pages of the stamps. I was too young to understand their value so like a kid might today, I tore them apart and stuck them on everything. I don’t remember the punishment I got, but I learned not to repeat that mistake.

When standing at the stores with mom, I was amazed at the skill the merchants developed at counting out the correct number of stamps and tearing pages just at the right place. We got stamps at the filling stations, grocery stores, and I reckon about any retail establishment we visited. I think some department stores gave them out, but I’m not sure which. Few stores, in the end were able to avoid going with the flow.

A quick bit of research told me that green stamps were actually started in the nineteen thirties, just during the depression, and wound down in the nineteen sixties. I remember stores suggesting the practice of sharing stamps. This allow even the cash- 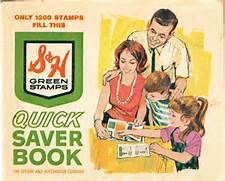 strapped homemaker a way to obtain small appliances or new lines. I’m told that green stamps are still traded on EBay and have value. I was surprised to find out they can still be redeemed! Go to the following websites for detailed directions: http://www.wikihow.com/Redeem-S%26H-Green-Stamps

My mother had boxes full of completed stamp books and would collect them with certain ‘gifts’ in mind. I remember going with her to a redeeming center somewhere. I have no idea if it was in town or maybe in Huntington. Once, when I went into a redemption center with her, we didn’t have nearly as many stamps as were needed for what she wanted. So what’s new? That’s the same as not having enough money. Who hasn’t experienced that?

Frankly, the dollar or redemption value was only around $1.20 for 1,200 of the little squares. In today’s money that’s not much, but it adds up and is better than nothing, especially if you’re paying for them anyway in the price of goods. Loyalty incentives are electronic today, and are represented by ‘points’ instead of stamps, so licking them is out of the question. Such contact with the computer screen leaves marks, and if you have a touch screen, things will only get worse.

In the end it was a gimmick. They used to say in the movies that ‘everything has its angle.’ They were right. Regardless of how you cut it, the stamp company made out printing tons of stamps and selling them to the retailers. The retailers would hang out the green sign, mark up prices, and give away the stamps with each purchase. They, too, would prosper. Of course there’s the poor consumer who is working twice as hard to the get their dollars’ worth. The best bet is that few customers ever get around to redeeming their books.

Maybe there’s a reader or two that still has an attic, or closet, full of stamp books. If they have, then maybe they will find some treasure long forgotten. Good luck.

WAY BACK WHEN IN LAWRENCE COUNTY, KY.