Experts: Real chance of U of L losing basketball title 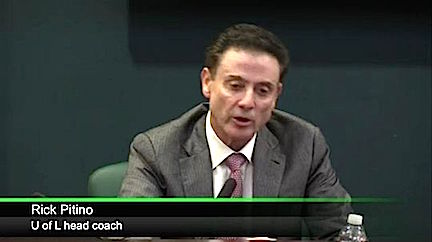 If the University of Louisville men’s basketball team used players who were ineligible during the 2012-13 season because they received improper benefits in the form of sex or strippers, the school’s national championship and other victories almost certainly will be vacated, NCAA enforcement experts say.

Two former members of the NCAA’s Committee on Infractions say it is almost automatic for the panel to vacate victories from teams that used players later determined to be ineligible.

One of them, Rodney Uphoff, a University of Missouri law professor who served on the committee from 2008-14, said the only defense would be if the player or players mostly rode the bench and did not make a big contribution to the wins.

Jerry Parkinson, a former law school dean at the University of Wyoming who was on the committee from 2000-10, said it became increasingly automatic during his tenure to vacate wins earned with ineligible players. he cited Memphis, whose 38-victory season – including its run to the championship game – was vacated when the NCAA found freshman Derrick Rose’s SAT score was fraudulent because somebody took the test for him.

Former NCAA enforcement director Chuck Smrt, who was hired by U of L to conduct its internal investigation, said at a news conference last week that vacating victories and the national championship are among the possible penalties for the university but he said he didn’t think they would be “appropriate.”

In an email Monday, he declined to elaborate, saying it wouldn’t be in U of L’s best interests for him to discuss specifics. The only thing he would say is that it is “always very difficult to compare cases.”

The NCAA charges released Thursday allege that former employee Andre McGee provided at least $5,400 in striptease shows and sex to 17 recruits and players, but because the university redacted names and dates, it is impossible to know if any played in the 2012-13 season, which ended with the Cardinals defeating Michigan to win the national title. 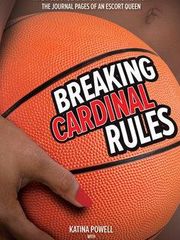 The book that led to the NCAA allegations, Katina Powell’s “Breaking Cardinal Rules: Basketball and the Escort Queen,” includes photographs of several players on the roster that season, including one of Chane Behanan and Powell and another with one of Powell’s daughters. Other photos show Montrezl Harrell, Russ Smith and other players.

In a social media post last year, Behanan said: “I know for a fact I didn’t come to Louisville because of those women, heck no,” while Harrell and Smith denied the allegations. Rozier, who now plays for the Boston Celtics, told the Boston Globe last October that “when it’s time to answer those questions and deal with that, I will.”

Since 2010, at least four basketball programs have been forced to vacate wins. They were Syracuse (101 games), Southern Miss (62), Central Florida (52), and Arizona (19). Missouri vacated 23 wins on its own. All were found to have had players who received impermissible benefits, making them ineligible.

Oct. 3, 2015: “Breaking Cardinal Rules,” a product of Indianapolis Business Journal Publishing LLC, is released for sale online. Powell, whose book was co-written with journalist Dick Cady, details nearly two dozen parties with dancers and prostitutes, including her own daughters, involving U of L players and recruits at Minardi Hall. She alleges that McGee, who left the staff in 2014 to become an assistant at Missouri-Kansas City, paid her $10,000. Three days later, Cady tells The Courier-Journal that Powell seems “pretty damn credible.”​​ (Photo: IBJ Publishing)
Eleven schools have had to vacate appearances in the Final Four, including UCLA, which lost in the championship game to Louisville in 1980, but none won the championship game.

Attorney Michael Buckner, author of “Athletics Investigation Handbook: A Guide for Institutions and Involved Parties During the NCAA Enforcement Process,” said Louisville will likely try to distinguish itself from Memphis by arguing its coaches had no advance knowledge of violations.

In contrast, he notes that Memphis was alerted before Rose’s freshman season about questions about his high school transcript, and the NCAA alerted Rose during the NCAA Tournament that it was voiding the results of his SAT.

But Uphoff, the former infractions committee member, said it doesn’t matter whether a school knew it was using a player whose eligibility was in question.

He also said he doesn’t recall any team found to have used an ineligible player that wasn’t forced to vacate victories.

He and Parkinson said some members of the infractions committee could be repulsed by the tawdry nature of the charges against Louisville.

“They are judges and some crimes are viewed more or less seriously by certain judges than others,” Uphoff said.

Louisville, which was cited by the NCAA with four of its highest level infractions, including Rick Pitino’s alleged failure to monitor McGee, likely will argue that charges against other teams forced to vacate wins were more serious.

The other teams that vacated victories:

» Southern Miss was hammered in April for violations that resulted in a 10-year coaching ban on head coach Donnie Tyndall, who was found to have committed violations including facilitating cash and credit card payments to two recruits, directing staff to complete coursework for seven players so they’d be eligible, and providing false information during interviews and directing a staff member to fabricate documents.

» Central Florida was nailed in 2012 for allowing a sports agent to help recruit basketball players and football players through inducements that included cash payments. The university, which had just come off probation for previous violations, was found to lack institutional control.

» Syracuse was sanctioned last year for failing to control and monitor its athletic programs over a decade, and its punishment involved multiple violations, including academic fraud and the failure to sanction players who tested positive for marijuana use. The money involved, however, was not much more than alleged in the Louisville scandal. Two Syracuse basketball and three football players received a combined total of $8,335, provided by a booster for work at a YMCA, and three of them got academic credit for YMCA internships they failed to complete.

» Missouri voluntarily vacated wins earlier this year for allowing boosters to provide impermissible benefits totaling $11,402. One paid players and a recruit for work that wasn’t done, while a second gave them and their families discounted rates at a resort hotel.

» At Arizona, legendary head coach Lute Olson was found to have impermissibly aided a basketball tournament at which two recruits who later played for the Wildcats received impermissible benefits. Olson himself was found to have failed to monitor his team’s compliance and to have lied when asked if he had written a letter asking for funds

ARCHERY IS A FAST GROWING SPORT IN REGION, NATION