Governor will be in town to answer questions 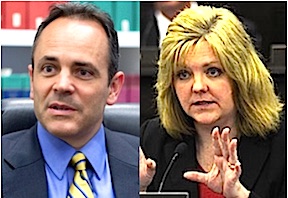 LOUISA, Ky. — Kentucky Governor Matt Bevin will visit Louisa Thursday afternoon as part of an eastern Ky. campaign swing to support Republican state legislative candidates who are up for election on Nov. 8.

The Governor will be at Dees Dairy Bar in Louisa at approximately 3:00pm to speak and then meet and greet Louisa residents according to Nicole Burton, a Bevin spokesperson.

GOP State Rep. Jill York will also be on hand at the rally, she said Tuesday.

The Republicans are making a push behind Bevin to take over leadership in the Ky. House of Representatives where they trail by only four members. York is a key piece of the puzzle. She is considered a favorite to retain her position even though both Lawrence and Carter Counties, which comprise her 96th District are both “Democrat” counties by registration.

She is opposed by Carter Co. Democrat Josh Mcguire.

Singing for a Cure for Huntington's Disease in Louisa