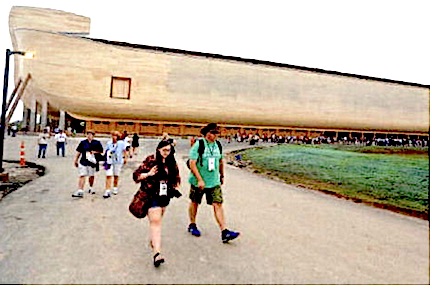 Its science exhibits may have been called “absolutely wrong” by educa­tor Bill Nye, but Kentucky’s $100 mil­lion Ark Encounter biblical theme park has drawn more than 400,000 visitors since it opened in July, park officials said.

The 510-foot-long Noah’s Ark rep­lica in Grant County, Ky., was predic­ted to attract 500,000 visitors in its first year by a state consultant and 1.2 million by Answers in Genesis, the Apologetics ministry behind the pro­ject, The Courier-Journal previously reported.

The flood of visitors from as far as California, Texas and even some oth­er countries has also doubled atten­dance at the group’s 10-year-old Cre­ation Museum, located 44 miles away in Petersburg, Ky., which could hit 600,000 this year if attendance rates continue, according to the group. In April it won permission for a large expansion of the Creation Museum.

“The Ark has a fascination global­ly,” said Mark Looy, a spokesman for Answers in Genesis.

Both remain controversial be­cause they argue that science supports the Bible’s creation story and that the earth is only 6,000 years old, that geologic features were made in Noah’s flood and that dinosaurs co-existed with humans – all contrary to established science.

In July, the park opened amid protests and was covered by national and international media. It followed six years of legal, financial and public relations battles taking center stage in America’s culture wars. AiG head Ken Ham said at the time he hoped it would “undo the brainwashing” of mainstream science.

Soon after, Bill Nye “the Science Guy” — a longtime critic of the Creation Museum — visited and told NBC that the exhibits were “much more troubling or disturbing than I thought it would be.” He said that “every single science exhibit is absolutely wrong.”

Local officials have been banking on the theme park as providing an economic development boom. It has led to an uptick in hotel bookings and prices north on I-75 toward Cincinnati, said Eric Summe, president of the Northern Kentucky Convention and Visitors Bureau.

But officials in Williamstown, Ky., said a lack of restaurants and hotel directly near the theme park has dampened the impact thus far.

“I think the expectation was there would be more foot traffic in our downtown areas,” said Jamie Baker, executive director of the Grant County Chamber of Commerce and Economic Development. “We’re not seeing the numbers of people coming and spending the dollars here that we would like” but that is likely to eventually change if hotels and restaurants are developed, she said.

At the BP EzyStop, one of two gas stations off the Ark Encounter exit, owner Tony Baffi said the theme park has “helped us a little bit, not tremendously.”

Some developers have expressed interest, but “no one has started to build yet,” said Williamstown Mayor Rick Skinner, who said he’s happy with the attendance.

The project drew controversy for using up to $18 million in state tourism tax incentives, a move upheld by a federal judge, and for hiring practices that required employees to sign a statement of faith and agree that they oppose same-sex marriage.

On Saturday, Looy said attendance hit 6,900. Inside, visitors can see 132 exhibit bays and displays that include dozens of pairs of sculpted animals in wooden cages, including dinosaurs, along with blacksmith and carpentry shops and living quarters for Noah and his family.

Visitors see displays showing the Biblical story of how original sin led to polygamy, violence, the presence of giants in the world — and eventually led the biblical God to wipe out civilization. Other exhibits argue that Ice Age or formations such as the Grand Canyon help prove the Bible’s creation story.

The park is still being built out. Next year Answers in Genesis plans to construct a “nomad village” and in several more years add a “walled city.”