Growing up in Louisa – by Mike Coburn

Growing up in Louisa – Kitchen Wonders!

As a child, I spent an awful amount of time at my mother’s knee watching her cook and bake. My mother was especially fond of cooking foods that tasted good, were good for you (by that day’s standards), and would be enjoyed by all.

She was really quite proud of her successes. Many friends complimented her ever so much at church dinners or when company dropped by. Even though she was technically not a ‘country’ cook, whatever that means, she was nevertheless very talented at turning out wonderful meals. In her case it was more about quality than a wide assortment of dishes mixed with the unusual spices and garnishes, or gourmet presentations. I never saw her sprinkle parsley, or dribble gravy or au jus over a dish. Hers were traditional meals that were good to eat and enjoyed by everyone.

I’ve noticed over time that there are people who cook because of social expectations, because no one else would, or out of fear that someone else might. There are also those that do it because they love food preparation. She literally loved to cook. I watched her hour after hour and in turn, I fell in love with taking ingredients in just the right amount and in the right order to create a classic masterpiece. Part of her the goal was to please others, but my selfish goal is the joy of eating.

I was told by several people, including ladies at church (she made lots of ‘pot luck’ meals) that my mom was the best cook in the county. I doubt she ever got a blue ribbon out at the fairgrounds, but I had to agree the food she cooked was well worth the eating. Our meals were limited to fried chicken, baked chicken, pork chops, spaghetti, Welsh Rarebit, pounded steak & gravy, liver and onions, salmon croquettes, beans & ham, several side dishes like Kale, collards, spinach, potatoes and gravy, mashed, boiled, fried potatoes, and potato salad. She made some really good desserts, too. I remember blackberry pie or cobbler, apple pie, chocolate pie, custard pie, pumpkin pie, sweet potato pie, strawberry shortcake (in season), chocolate cake, angel food cake, yellow cake, butterscotch pudding, chocolate pudding, and ice cream on or with the pie, cobbler, or cake. I also remember her boiled custard sprinkled with cinnamon and allowed to cool. We had a few ice cream floats made with ginger ale, or root beer, over ice cream. That was a rare but welcome treat. 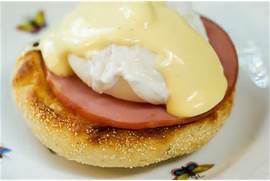 I remember her fried eggs with bacon, ham, or sausage, or French toast, or pancakes. She would often broil the toast topped with butter, but she also used the electric toaster. While that did both sides, it was impossible to put the butter on before toasting. I discovered that when I nearly burned the house down. Now, I love it both ways but find the toaster easier to use. It’s really not hard to add the butter later. Eggs Benedict, made on a toasted English muffin with a slice of Canadian bacon, poached eggs, and hollandaise sauce is worth eating for breakfast. In fact, I’ve seen days I’d eat that for supper or while watching a ballgame. Mom knew how, and I’ve had it in fine restaurants and on a cruise, but I’m not sure about how to best make the sauce. I’ll take a moment one day and look it up.

I remember that a couple of churches put out recipe books with favorite recipes from the congregation. Some of those had been passed down from many generations. In fact, some were

so old that now you couldn’t likely find all the ingredients. In contrast, many recipes of today call for prepackaged products. In my mind country cooking isn’t about using mixes, but rather doing stuff from scratch. That’s not as easy as it used to be and I’m sure some cooks would wonder why bother. The answer is often, taste.

I have owned many different kinds of skillets and pots in my life, but the cast iron ones are what mom used and when rightly seasoned and cared for they can’t be beat. I tried and learned to hate the ones with anti-stick stuff, and even those with copper bottoms. I either burned things or I’d ruin something with my scraping. You see, I like to watch things cook. Sauté mushrooms or onions is what I mean. I like to stir the pudding and hate the taste of the instant variety. I feel cheated when that is served up.

Every kitchen had its nice containers lined up holding sugar, salt, flour (unless you had a flour bin Hoosier) and other goodies. Storage often required a pantry, and some folks had a ‘root cellar’ or ‘spring house,’ that kept the jars and crocks safe from vermin or raccoons. The handy dandy meat grinder would attach to the pull out porcelain shelf on the cabinet or Hoosier, or on the kitchen table itself. I used that to make sausage, hamburger, pimento cheese, and various salads such as chicken or ham.

If we needed chopped onion, garlic, celery, bell pepper or anything else we used a cutting board and a sharp knife. No food processors were around at the time. We did have a mixer but I remember that as the day I turned white along with the kitchen. I mean really white. The flour came out and covered me all over. Mom didn’t know whether to laugh, or make me clean it up. In the end, she did both. 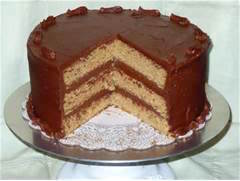 I told the story a few years ago of the peanut butter cake I made for my math class. That was my first and definitely ought to have been a failure considering I knew nothing about sifting flour, or the real purpose of some ingredients. As it happens my main goal was to put in what I wanted and adjust to meet the right consistency. It worked by some miracle and was well-liked by my classmates. It was quickly consumed, but that is the nature of teens, after all. Even today if the cake falls, cracks, or is otherwise deemed a failure, we find they are often tasty if not pretty. My wife and I call them flop cakes. My kids used to run for the kitchen when they heard mom’s cake didn’t turn out. We knew she’d likely try again and we could do a free-for-all dive into the failure. That meant we won all the way around. You see, flop cakes have no calories, but eating them quickly would dispose the evidence of one gone wrong.

I learned the hard way and I am perfectly willing to use a mixer, but I have also been known to beat the batter a hundred strokes, give or take and distracted ten or so, with a wooden spoon. There is satisfaction in that, I think. Maybe I get rid of some spent-up emotions, but I’d like to think my cakes had something special, a departure from the everyday and something of the signature of an excellent cook. I’m thinking that men are generally more adventurous in cooking. They are not aware of the costs related to experimentation, or the potential for a really big mess, but they are prepared to take common dishes and move them into the realm of being uncommon. I’ve always loved to adjust recipes and maybe add surprises in hopes of adding fresh flavors or textures. My thinking is that if three eggs are good then six must be twice as good. I know instinctively that I will have to add more flour to get the proper consistency, and maybe a little more vanilla extract, and surely a bit more sugar, but the cake will be just fine and likely be a hit. If not, another wonderful ‘flop cake’ will be born.

Cookies work the same way and there are many ways to add this or that to make them more special. Basically, they are equal portions of flour and sugar and some butter, salt, shortening, extract of vanilla, perhaps an egg and some milk to blend the dry ingredients. It is at this point that nearly all of us want to add chocolate chips, maybe some butterscotch chips, macadamia nuts, or a dollop of peanut butter. Some will sprinkle cinnamon sugar, or confectionary sugar as a topping. That’s great and most satisfying, but some of us comb through the shelves at specialty stores looking for ginger, or some other spice that might result in a new concoction and wonderful new taste.

I was once on a pizza quest. Every Sunday over a period of several years, I would make pizza at home. My wife makes wonderful sour dough breads, so I would use sourdough for the crust. Sometimes I did thin crust and sometimes let it rise to be thick and bready. I would work on the sauce all day, using fresh herbs and spices, onions, peppers, and often a mixture of hamburger, sausage, and peperoni, and loaded with mozzarella and parmesan cheese. The tomato sauce, and sometimes crushed tomatoes, and the non-meat ingredients would simmer for hours while I browned the burger and sausage. Finally, I would roll out the crust on several large greased cookie sheets, add the sauce and the meats and cover it with the cheeses. My kids looked forward to the next attempt for the perfect pizza and it wasn’t long before their friends knew when to stop in. I made enough for everyone and leftovers for the next day. Well, the kids are grown and moved out, so my wife makes pizza when some are coming over, but I have retired from these duties. She does a great job and the kid’s love her pizza.

My problem today, besides my girth, is that I love most any food. Whether seafood, Italian, Oriental, deep Southern faire, or whatever, just bring it on. My wife says I’m on a seafood diet…that is, I eat everything I ‘see.’ Frankly, standing over a stove is harder for me, but I’m your guy for chopping onions, celery, or peppers for the dressing. Turkey and all those holiday foods are coming just around the corner. Apple festivals are about to kick off, Brunswick stew (I used to think that came from the Brunswick Hotel), pumpkin pies, and other fall dishes are to soon be upon us. Ah, so much food, so little time.