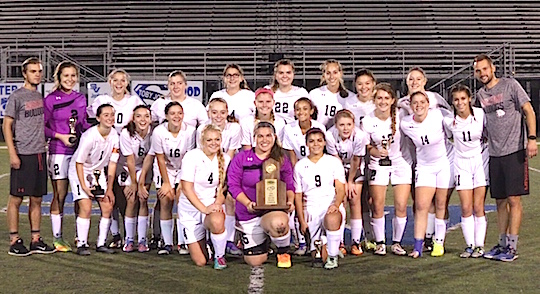 Will play Estill Co./Perry Co. winner in 1st round of State tourney

Robinson Creek, Ky. — For the second game in a row Lawrence Co. ( 17-2-2 )  won a dramatic 2-1 game in a shootout/penalty kicks, this time over Johnson Central ( 15-8 ) at Shelby Valley high school last night in the 15th Region championship game. The Dawgs will Host the winner of Estill Co./Perry Co. Central on Monday night in the first round of the State Tournament.

It came down to the 9th round of the shootout when senior Makenzie Frazier found the back of the net to set off a wild celebration as the Bulldogs won the shootout 5-4. Dawgs freshman goalie Ally Moore and Eagle sophomore goalie Alyssa Pack were both outstanding in the net all night. 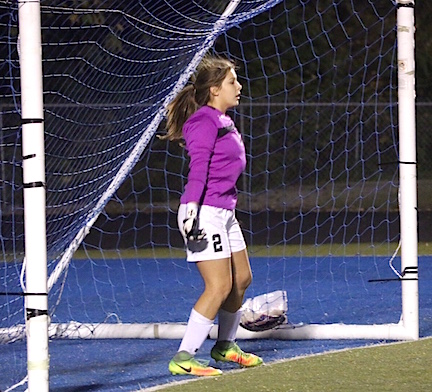 Victoria Clevenger got the Dawgs on the board in the 26th minute of the first half and the Lawrence Co. defense took over once again for the rest of the half and well into the second half until Johnson Central got a favorable call and Molly Davis netted a free kick with 16 minutes left to tie the score at 1-1.

Both teams battled for the rest of regulation and the game went into two sudden death overtimes with both teams remaining scoreless to set up a shootout with one team moving onto the State Tournament and the other team’s season would be over. 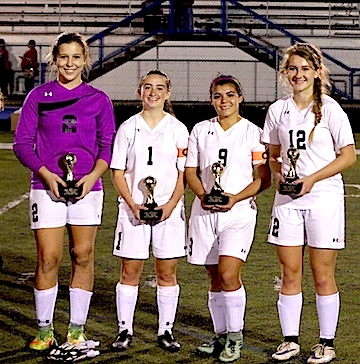 “… I really can’t describe how I’m felling right now, so excited for my team it is an unreal feeling.” Going through the shootout vs Prestonsburg on Monday helped me tonight most definitely, we practice penalty kicks in practice but nothing like this can simulate a Region championship.” Awesome feeling to host a state tournament game next week.”

“… I was thinking I have to score this is my senior year and could be my last game. I have to put it in the net.” I looked into her eyes and I knew she thought I was going right so I went left and she guesses wrong and I made it.” So amazing right now really I have now words to describe my feelings, can’t wait for Monday night.”

“… Playoff and Postseason soccer at its best tonight between two really good teams. Every teams wants it and every time is going to give it their best shot. Both teams battled for 90 minutes.” We went though a range of emotions during the game and so excited and proud of our team, they showed once again how much heart and fight that they have.” This win isn’t just tonight it’s a payoff for the last three months everybody has worked so hard and pulled together and now we get to savor this moment.” We knew Johnson Central was going to set back and be patient and that’s exactly what they did. To get the early goal was huge for us. That put us in the drivers seat.” Davis and Preston are both very good and we really kept them in check tonight.” It was a questionable call on the free kick and I will go on record for that.” Makenzie Frazier has had ups and downs and was glad she got the game winner she deserved it. Ally Moore and our defense was outstanding again.” I also want to thank our fans for making the trip they have been great all year. Can’t wait to see our home field on Monday night.”

Art classes outdoors are signs of the season...