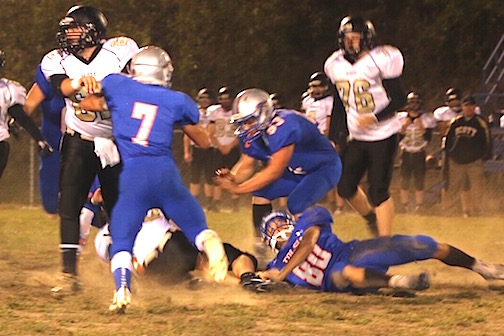 Tolsia playing at home for only the second time all year controlled the time of possession and kept the vaunted Scott offense off the field. The Rebels had 395 yards of total offense in the win.

The Rebels got on the board first early in the second period when QB Logan Presley found pay dirt from 5 yards out completing a 95 yard scoring drive. After a Scott punt the Rebels went on a 72 yard scoring drive as Jordan Johnson scored from 2 yards out to push the score to 12-0 which would be the halftime score.

Tolsia took the second half kickoff and marched down the field to put some distance as Brian Campbell scooted in from 2 yards out and Presley hit Trey Smith for the two point conversion and the Rebels led 20-0. Scott would get their only score of the night on a 65 yard kickoff return on the ensuing kickoff to make it 20-8 with 4:55 left in the third quarter.

Presley scored once again this time from 1 yard out and found Jordan Johnson for the conversion in the 4th quarter to finish off the scoring at 28-8. Scott never ran a single play in the 3rd period and all four of the Rebel touchdown drives went at least 10 plays.

Tolsia will make the long trip to Braxton Co. next Friday night.

Every Thought Captive - The Road of Change