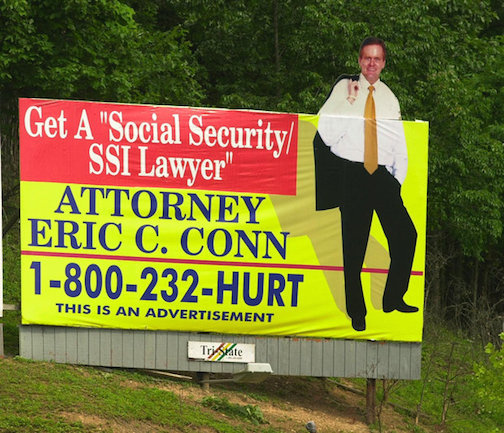 The Social Security Administration erred by terminating disability benefits for hundreds of Eric C. Conn’s clients in Eastern Kentucky without first giving them a fair hearing where they could show evidence of their ailments and rebut the government’s fraud claims against them, a federal judge ruled Wednesday.

The SSA believes that roughly 800 of Conn’s clients are not truly disabled because Conn, a Floyd County lawyer, is criminally charged with defrauding the benefits system by rigging disability applications in cooperation with a Social Security administrative law judge, who also has been charged, U.S. District Judge Amul R. Thapar wrote. The men are awaiting trial next year.

However, Thapar wrote, it’s possible that Conn rigged his cases and that his clients are disabled, but they had the misfortune of hiring a lawyer who preferred to take shortcuts with applications. The burden rests on the SSA to give Conn’s clients due process before it cuts off their benefits, he wrote.

Thapar’s decision directly affects seven plaintiffs in his court, led by Amy Jo Hicks, who sued the SSA after their benefits checks were ended. But it potentially could help hundreds of other Conn clients who were cast out of the benefits system after “redetermination hearings” that essentially assumed their previous medical evidence was fraudulent, Thapar wrote. Some of those claimants are now suing the SSA in federal court in Kentucky, West Virginia and Tennessee, alleging a violation of their due process.

In 2007, Conn helped Hicks win disability benefits, citing her headaches, depression and anxiety as well as injuries to her right arm, neck, back, head, legs and hips.

Prosecutors say Conn falsified medical documents to make his clients appear disabled and paid doctors $300 to $450 each to sign completed evaluations supporting his clients’ appeals. Inside the Social Security bureaucracy, Judge David B. Daugherty arranged for Conn’s appeals to be assigned to himself, collecting $9,000 to $9,500 every month from the lawyer in exchange for guaranteed approvals, prosecutors allege. Conn and Daugherty were indicted last spring.

Whatever the government believes of Conn, it must give his clients a fair chance to make their own cases, Thapar wrote.

“But when the government redetermined her right to disability payments — and categorically excluded some of her medical evidence because it had ‘reason to believe’ the evidence was fraudulent — she never got a chance to challenge that factual assertion before anyone,” Thapar wrote.

Since last year, the SSA has held 1,487 redetermination hearings for Conn’s clients, with about half keeping their benefits and half losing them, said Ned Pillersdorf, who is Hicks’ attorney. The redetermination hearings are “straight out of the McCarthy era, where you are confronted with evidence that you’re not allowed to see and not allowed to question,” Pillersdorf said.

“What we’re hoping — what should logically follow — is that now that a distinguished federal judge has ruled this way, the SSA will wave the right flag and do the right thing here,” Pillersdorf said.

Dorothy Clark, a spokeswoman for the Social Security Administration, declined to comment on the ruling Wednesday.

In his order, Thapar granted Hicks’ request for summary judgment against the SSA. He ordered an administrative law judge to conduct a supplementary hearing for Hicks where she can discuss the medical evidence that Conn submitted on her behalf a decade ago. If the administrative law judge concludes that the evidence “deserves some weight,” then he must reconsider the decision to end Hicks’ benefits, Thapar wrote.

“Hicks might or might not have sufficient evidence to warrant benefits,” Thapar wrote. “Rather than guess at the facts, the court will give the professionals a chance to determine them.”