When will Lawrence County get some of the ‘pie’ 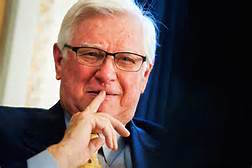 FRANKFORT, Ky. Oct. 7, 2016) – U.S. Rep. Harold “Hal” Rogers (KY-05) and the Kentucky Division of Abandoned Mine Lands (AML) are pleased to announce that the city of Pikeville has been given preliminary approval for a $5 million grant by the Office of Surface Mining and Reclamation Enforcement (OSMRE) to begin construction of an industrial park on former mine land.

The money would fund a 50,000-square-foot spec building in what officials envision will become the Marion Branch Industrial Park, to be built on about 400 acres of reclaimed mine land in Pikeville.

The Pikeville grant was part of the $30 million in federal grant money made available from the U.S. government’s General Fund to AML in 2016 for pilot projects in Appalachian counties that have the potential to create long-term economic benefits.

Gov. Matt Bevin, who has called the pilot program a tremendous opportunity for Appalachian counties, said the proposed industrial park would bring good-paying jobs to a region that needs them.

“It’s no secret that the war on coal has negatively affected Appalachian communities,” said Gov. Bevin. “This project provides us a chance to help create jobs, enhance regional opportunities and improve the overall quality of life in this part of eastern Kentucky. We applaud the vision and efforts of those who have worked tirelessly to make this project possible.”

U.S. Rep. Rogers, Chairman of the U.S. House Appropriations Committee, who was in Pikeville on Friday and announced the grant, was instrumental in securing the $30 million through the FY 2016 Omnibus appropriations bill.

“The core mission of the AML pilot project is to revitalize the heart of the coalfields — both by rehabilitating our land and creating good-paying jobs,” said Rogers. “This is one of many projects that will help us diversify our rural economy and reimagine the future of Eastern Kentucky.”

Pikeville officials have said the Marion Branch Industrial Park development project will aid in developing a flourishing economy in the region by providing a resurgence of jobs through the importation of both large and small companies that locate in the park. With a labor market of 146,637, the area has an abundance of skilled workers and people willing to work.

The industrial park proposal has already received approvals for $34.6 million in grants and loans for the property purchase, construction of a new road and bridge, new sewer, water and transmission lines and additional sewer capacity. In addition to the AML grant, funding has come from the Kentucky Transportation Cabinet, the U.S. Army Corp of Engineers, a rural development loan & grant, the Economic Development Administration, a community block & development grant, and from coal severance money.

As part of the AML grant, conduit will be installed for high speed broadband through the KentuckyWired initiative that will provide 1 gigabyte service to the park, which will be some of the fastest speeds in Kentucky.

The AML Pilot project is a joint effort by Kentucky Cabinet for Economic Development, the Department for Local Government, the Kentucky Tourism, Arts and Heritage Cabinet and the Energy and Environment Cabinet, Division of Abandoned Mine Lands.

The pilot program is part of $90 million in funds that has been set aside for one-time grants to Kentucky, Pennsylvania and West Virginia to return coal sites to productive uses that will bring new jobs to replace the thousands lost during the downturn of the industry.

Application forms for project submittals can be found at AMLPILOT or by calling or emailing Mr. Bob Scott, Director, KY Division of Abandoned Mine Lands, 300 Sower Boulevard, Frankfort, KY 40601. 502-782-6761, BobF.Scott@ky.gov

Where is Lawrence County’s application?