Coal not coming back ‘no matter who is elected in November,’ says Kentucky Power president 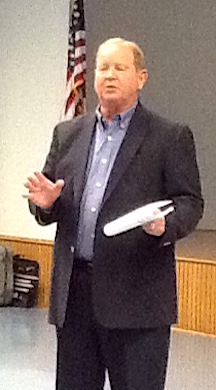 Coal is not coming back “no matter who is elected in November,” Greg Pauley, president and chief operating officer of Kentucky Power, told the Kentucky Governor’s Conference on Energy and the Environment last month, Curtis Tate reports for McClatchy Newspapers. Pauley said natural gas “is the primary reason why coal is on the ropes.”

Republican presidential candidate Donald Trump has said he will revive the coal industry, but also supports natural gas development from hydraulic fracturing, and coal will continue to struggle as long as natural gas is more cost-effective, Tate notes.

Pauley said gas, which is expected to overtake coal this year as the country’s No. 1 source of power, “could continue to under-price coal for the next 20 to 50 years,” Tate writes.

Kentucky Power, a subsidiary of American Electric Power, has already transitioned one of its Eastern Kentucky coal-fired power plants in Louisa to natural gas.