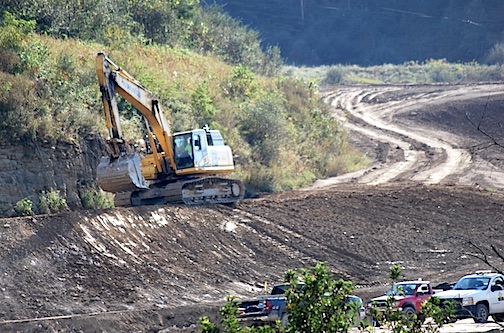 Lazer editor Mark Grayson recently wrote a letter to the State Dept. of Transportation concerning the progress of road projects that have been funded and were underway until Gov. Bevin halted all projects statewide in January. The projects have now been re-started. Here is the letter written by district 12 Transportation spokesperson Sara George received today.

“…Here is an update on Lawrence County projects that you requested. I apologize that it took longer to put the information together than I anticipated. If you have any questions, give me a call at 606-207-3950 or reply to this email.

*  The project to construct a new roadway to connect KY 3215 to KY 1885 at Yatesville Lake is part of the Pause-50 program. Design and right-of-way acquisition were completed on this project before the Pause-50 approach went into effect. That means utility relocation and construction are part of Pause-50.

*  Pause-50 is the Transportation Cabinet’s plan to preserve and shore up the Road Fund cash balance by halting the starts of new state-funded projects for the first year of the biennium (July 1, 2016-June 30, 2017), and in the second year aim for a goal of $50 million allocated on state-funded projects. 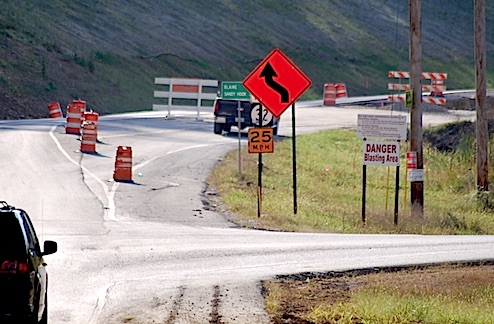 In essence, the Cabinet will “pause” adding new state-funded projects for the first year in the biennium. This pause does not apply to resurfacing.

“For the first time in recent history, the Cabinet faces a low Road Fund cash balance, which compromises our ability to authorize new state road projects over the next biennium,” Thomas said in testimony before the state’s Interim Joint Committee on Transportation.

“The ‘Pause-50’ approach is designed to slow or delay the starts of new projects so that we can pay current expenditures, recoup lost revenue and rebuild our funding base.”

KYTC operates under a cash management plan aimed at maintaining a minimum balance of $100 million, but the current balance is near zero. This hasn’t happened since 2004 when the balance drop to $30 million.

For the second year, Pause-50 allocates $50 million for state-funded project starts. This number could be higher or lower depending on the flow of revenue. 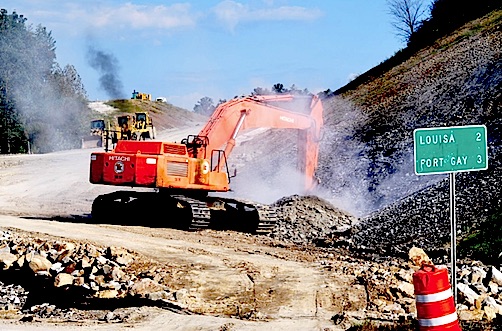 *  Reconstruction of KY 32 from US 23 to KY 3215 (turnoff toward Yatesville Lake golf course and campground). This project was originally awarded to Elmo Greer & Sons in the amount of $17,142,800.75. Greer’s company was bought by Bizzack, which inherited the contract/project. After resolving some utility relocation issues, Bizzack resumed construction, which is designed to provide a better alignment of the roadway with widening in some places. The total length of the project is 4.07 miles; it goes from US 23 to the end of the Corps of Engineers’ reconstruction project near the lake.

*  Reconstruction of CR 1529 from the intersection of KY 2565 up the hill toward Walmart. Philmor Contracting was awarded this job in the amount of $1,738,957.78. Work started in February 2016. Following an interruption to relocate utilities, construction resumed and is ongoing.

*  KY 32 from US 23 to KY 2565 (from the hill behind Walmart to Kentucky Fried Chicken). Bizzack is the contractor for this project, awarded at a low bid of $6,131,553.22. Work on this job also started in February 2016 and is ongoing. It will provide a new roadway alignment for improved safety and mobility.

These are all the active construction projects in Lawrence County at this time. This list does not include routine maintenance work.

Obviously the long awaited Dead Man’s Curve near the Louisa Water Plant and the back entrance to Preece Avenue (Meadowbrook) is not mentioned despite being on the road plan explained by both former State representative Rocky Adkins and current State Rep. Jill York for two years. Ms. York promised to check on the status of that project and the others last month but has not responded up to this time.

Here is the status of the Dead Man’s Curve Project:

A project to improve sight distance and eliminate Dead Man’s Curve on KY 2656 in Lawrence County has been in the State Highway Plan since 2012.

This project has already been through four of the five phases. Planning, design, right-of-way, and utility relocation have been funded and are complete.

The final phase, Construction, is listed in the current State Highway Plan for Fiscal Year 2016. However, this project is included in the Transportation Cabinet’s Pause 50 group. That means it is among the state-funded projects whose start has been halted during the first year of this biennium (FY 2016). We do not yet know whether it will be included in the $50 million allocated to state-funded projects in the second year of the biennium (FY 2017). In fact, the $50 million figure could be higher or lower, depending on the flow of revenue.

The Pause-50 plan includes approximately $145 million in state-funded projects that have been “paused” in FY 2016 (statewide). Obviously if the Cabinet is able to allocate $50 million next year (FY 2017), that will not cover the total number of projects on the “paused” list.

Sometime before July 1, 2017, Transportation Cabinet officials in Frankfort will determine how much money will be available to resume state-funded projects next year. As soon as the list of Pause 50 projects that will be “un-paused” in FY 2017 is available, we will make it available to the media.

LAWRENCE MAN ARRESTED FOR 17TH TIME ON 32 CHARGES SINCE 2004