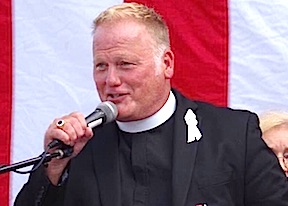 A Kentucky Republican running for state House who has gained national at­tention for racially charged Facebook posts is being asked to drop out of the race by his party’s leadership.

Dan Johnson, a bishop at Heart of Fire Church in Louisville, has been roundly criticized for posts comparing President Barack Obama and his wife, First Lady Michelle Obama, to apes.

Other pictures on Johnson’s Facebook page call upon states to ban Islam and re­fer to the religion as a criminal syndi­cate.

“The tone and content of your social media posts are inconsistent with the values of the Republican Party and have no place in the political arena,” the letter said.

He previously defended his posts about President Obama in an interview with WDRB, suggesting it was satire.

Brown and Hoover’s letter said Johnson has a right to say whatever he wants, but that elected leaders must hold themselves to a higher standard.

“They demonstrate a total disrespect for a number of minority communities and your comments after the fact show either a lack of understanding or concern for how offensive this action is to respectable people of any race,” the letter goes on to say.

Johnson is running against incumbent Linda Belcher, D-Shepherdsville, in a district that encompasses parts of Bullitt County.

Republicans hope to take control of the state House this fall for the first time in nearly a century.

According to GOP officials, Johnson was selected by the Republican Party of Bullitt County to replace another candidate who was ineligible to run for the House seat.