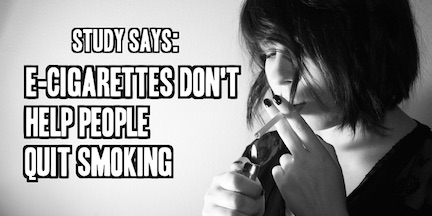 A recent study published in Nicotine and Tobacco Research evaluated e-cigarette use and quit attempts at 3 and 6 month follow ups. The researchers sampled 6,526 people from 187 primary care clinics in Ontario, Canada.

They found that, after three months, smokers who also used e-cigarettes were approximately 30% less likely to have successfully quit smoking compared to smokers who did not use e-cigarettes.

At the 6 month follow up, smokers who also used e-cigarettes were about 50% less likely to successfully quit than smokers who only used traditional cigarettes.

Findings from this study are consistent with other similar research showing that dual users (traditional smokers who also use e-cigs) are less likely to quit.

What do heroin and jobs have to do with one another?