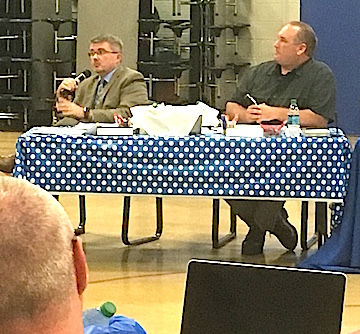 FALLSBURG, Ky. — The Lawrence Co. Board of Education met for the monthly meeting Monday Sept 19, 2016 at Fallsburg Elementary School as part of the BOE’s traveling road show which will bring the meetings to all county schools at least one time each year.

All members were in attendance.  The minutes were approved by the board, motion by Barbara Robinson and second by Garnet Skaggs.

After the opening prayer, students from FES performed a song using sign language.  The students wanted to learn sign language to assist one of their fellow students.

Superintendant Dr. Rob Fletcher then gave a few remarks about upcoming and current events at the schools.

On September 29, 2016 there will be a tax hearing to approve the recommendations from the board. The board elected to not take the compensating tax rate on property this year although every other taxing district in the county did so.

The compensating rate is calculated to bring in the same amount of actual tax money as the taxing district had last year, and this year the rate was 47 cents per hundred dollars, five percent lower than last year. The board voted unanimopusly to not take that rate but to charge 2% more thus getting about $200,000 more than last year in real money.

There was no mention of what the extra tax money will be used for.

Several concerned parents and teachers then responded during the public comments. 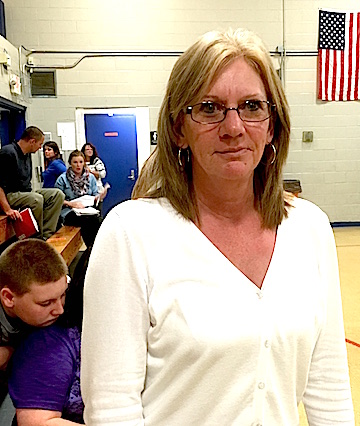 Sharlene Mills, a concerned parent, expressed her feelings about a possible school consolidation. She said the students would not benefit from such a move.  She presented the Board with a signature petition with over 200 signers.

Board chairman Heath Preston answered saying, “the board wants to be completely transparent and your comments are welcome.” He did not respond directly to the consolidation, however. The issue has not come before the BOE officially but there has been considerable discussion in the county about building a news school for Fallsburg and Blaine as well as Louisa East and Louisa West.

All schools mentioned are older structures that are not located near the county’s only high school causing students to have long bus rides to and from that facility.. But the state department of education has placed Lawrence County at number 100 in getting funsing for any new school and taxpayers have been angered by increases in property tax already.

Board member Garnett Skaggs, who represents the Blaine area,  also reassured the crowd that no serious communications were taking place at this time about a school consolidation.  Dr. Fletcher stated that  they would only advocate for that resolution after the pros and cons were reviewed and that nothing would be done unless it benefited everyone. 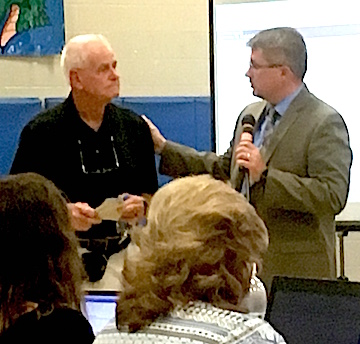 Jim Downs, a resident of Fallsburg also suggested to the board that the flag pole out in front of the school either be repaired or replaced.

The following motions were made and approved:

*  Approved monthly financial report from Director Edris Humphrey, who is retiring at the end of September.

*  Approved a motion by Madeline Roberts, second by Jim See to appoint a new treasurer due to the retirement of Edris Humphrey. Applications are being taken at this time. (See below)

Re: Request to the Lawrence County Board of Education for Changes regarding Position

Request the following position be changed: