Significant design and engineering progress made; strategic partnership agreements will save approximately $10 million… 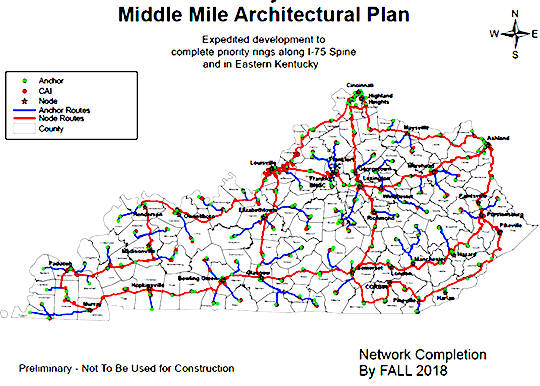 FRANKFORT, Ky. (Sept. 16, 2016) – Today Gov. Matt Bevin and U.S. Congressman Hal Rogers announced that the state’s broadband initiative, KentuckyWired, is moving forward with the initial build out in eastern Kentucky followed by the rest of the state. Since announced last year, significant progress has been made in engineering, site design and surveys along with strategic partnership agreements and more.

“Access to a skilled workforce is a critical factor for attracting employers, and is vital to making Kentucky’s economy robust and sustainable,” said Gov. Bevin. “Connecting companies and Kentuckians with high-speed, high-capacity Internet will lead to new opportunities and business growth. This will be a tremendous tool in growing our local economies and developing our workforce. Our administration is fully committed to the KentuckyWired project and we are excited at the possibilities before us as a result of its completion.”

“We are already getting a glimpse into the high-tech opportunities that will be available to Eastern Kentucky and across the Commonwealth with access to high-speed, high capacity broadband,” said Congressman Rogers, co-founder and co-chair of SOAR. “New jobs are being created through high-

tech businesses, like BitSource in Pikeville and Interapt in Louisville, and grant funds have already been awarded to support planning projects for economic development and education. We are clearly on the right path and our future is looking brighter in our most rural communities.” 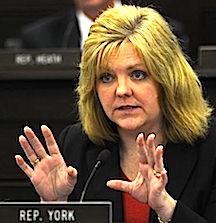 “Broadband Internet access in Eastern Kentucky will change the game entirely, and I am thrilled to have the opportunity to support the Governor in making it a reality. The connectivity that comes from maximizing access and speed of information sharing erases the hurdles of location and transit time, and will revolutionize the rural communities of Eastern Kentucky. As our communities struggle to rebound from the erosion of our economy due to coal losses, projects like Kentucky Wired must be priorities as they will create jobs and opportunities in our region.”

The EKN partnership covers 21 counties in eastern Kentucky and will tie into the main trunk line from northern Kentucky. The Cincinnati Bell partnership is critical in that it is one of two key gateways—along with Louisville—to the worldwide web points of presence. A presence in both Cincinnati and in Louisville provides redundancy in case one site has issues. Without these links, KentuckyWired would just be a network within the state with no connections to the high-speed, high-capacity Internet.

“Cincinnati Bell is pleased to partner with the State of Kentucky on this important initiative,” said Gary Peddicord, General Manager, Carrier Services, for Cincinnati Bell. “Cincinnati Bell has a long history of supporting economic development efforts in the communities we serve, and broadband connectivity is a key part of creating jobs and opportunity in Kentucky.”

“EKN partner companies have been in business more than 60 years,” said Allen Gillum, CEO and General Manager of EKN. “We are happy to be a part of KentuckyWired and to bring our experience and resources to this important project.”

These agreements highlight KCNA’s ongoing commitment to work with existing infrastructure companies to efficiently and economically improve broadband services in the Commonwealth. Additional strategic partnership discussions are currently underway throughout the Commonwealth.

The KentuckyWired middle-mile network, a public-private-partnership with the Macquarie Group, will consist of more than 3,000 miles of fiber optic cable and more than 1,000 government and post-secondary education sites that will be connectivity points in communities for local internet service providers to tap into for last-mile service to customers. Preparation work has already taken place at nearly 100 government, university and community college sites in eastern and northern Kentucky.

“The KentuckyWired project levels the mountains and the playing field for the people of eastern Kentucky to compete in the global, data-driven economy,” said Dr. Devin Stephenson, president of Big Sandy Community and Technical College. “This is the single most important investment in economic and workforce development that will have a profound impact on the entire Commonwealth, from Pikeville to Paducah.”

Before extending fiber throughout Kentucky, KCNA is working with local/regional telecommunications and utility companies on agreements to attach cable to utility poles owned by those companies. These local and regional providers are important partners to ensure the network is built throughout the Commonwealth. KCNA has entered into agreements with 100 percent of the utility pole owning companies in eastern and northern Kentucky and is rapidly nearing completion on the agreements necessary to complete the initiative throughout the Commonwealth.