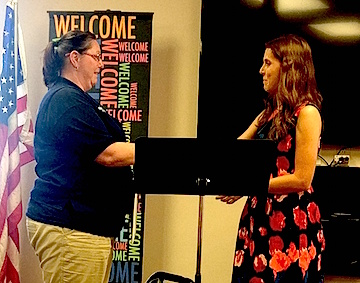 Rotary held their weekly meeting on Thursday, September 8th. The meeting began with celebrating Mr. Dan Smith’s birthday and the welcoming of a new member. Michelle Porter of Walmart, who joined and received her new member packet.

The Rotarians did not schedule a guest speaker for this meeting, all talk was about getting everything ready for Septemberfest. Many of the Rotarian’s were working hard to make the “Rotary Hash” and “Bahama Mama” another success.

President Lindsey Case encouraged every Rotarian to sign up to work at the booth, and stated that she had several of her Lawrence County High students that had signed up to donate their time. She asked that as Rotarians, they show those students how to be good volunteers.

After asking if there were any questions or announcements, or anything for the good of Rotary, the meeting was adjourned.