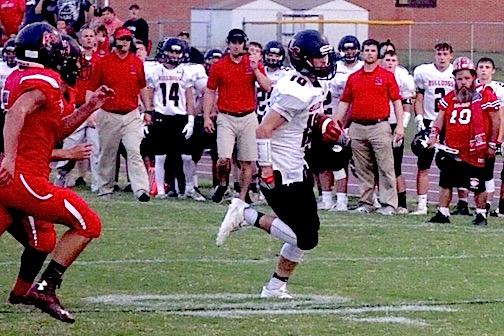 Stanton, Ky. —  Lawrence Co. evened their record at 2-2 with a convincing 44-21 road victory over Powell Co. on Friday night. The Dawgs won for the first time away from home in 2016.

Lawrence Co. fans made the hour and forty five minute trip down the Mountian Parkway and had more fans than the home standing Pirates.

LC jumped out to a 14-0 lead in the first quarter and looked like they may duplicate the 37-0 thrashing of Powell Co. in Louisa last year, but the Pirates had other ideas and stormed back with two touchdowns to make it 14-13 right before half. The Dawgs got a big defensive stand with under three 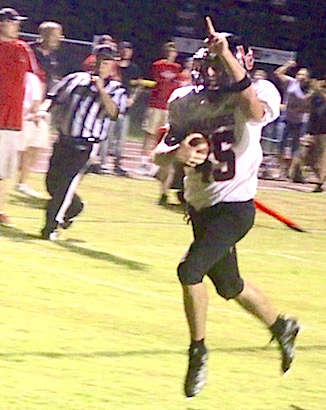 minutes to go in the 2nd quarter and Noah West found Jordan Johnson all alone in the end zone for a 21 yard pitch and catch to regain the momentum and take a 20-13 lead into the half.

In the 3rd quarter the Dawgs got two touchdowns in a span of two minutes to gain full control of the game at 36-13. After a Powell Co. touchdown to start the 4th quarter, Hunter Crum recovered the ensuing onside kick and on the first play of the drive Avery Bowman busted up the middle and went 59 yards untouched to seal the Bulldog victory.

#45 Avery Bowman pointing toward the sky on one of his three touchdown runs vs Powell Co.

Senior Avery Bowman wearing #45 in honor of Blake Ramey had three rushing touchdowns on the night he scored on runs of 31, 7 and 59 yards respectively. Senior Jordan Johnson also scored three touchdowns, one on the ground from 16 yards out, he caught two touchdown passes as well including one from 21 yards and one from 48 yards, Johnson also had a two point conversion run and picked off a passon defense for good measure. Sophomore QB Noah West had two touchdown passes and tacked on three two point conversion runs in the victory.                      LAZER VIDEO CLIP Click HERE

QB Noah West scoring on one of his three conversion runs vs Powell Co. He also threw for two touchdown passes.

This Friday night will be Homecoming for Lawrence Co. as they play host to Greenup. Co. ( 2-2 ) at Luke Varney Jr. Memorial Stadium game time is 7:30. 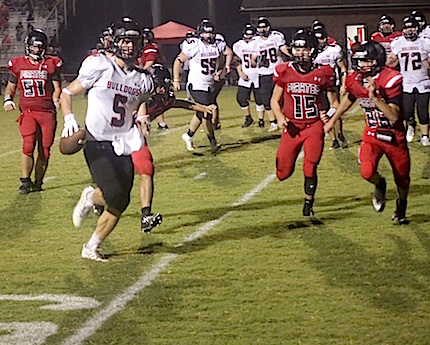 “… Absolute great road win, so proud of these guys with a long bus ride and come up here and take care of business.” I felt like we improved this week, how about Avery Bowman and Jordan Johnson both were outstanding tonight making plays all over the field. Bowman had a monster game and we felt coming in that he do that against the Powell Co. front, we added a few things that fit his skill set this week.” We thought Johnson could do some things if they covered him one on one and he did, we will continue to work on that its a one man route and he is tough to cover.” Glad to be back at home next week vs Greenup Co. it will be another challenge for us.”

“… Wearing Blake’s number just out here playing football and trying to honor a friend, just having fun just like he would want.  Powell Co. runs a similar defense that we run and we are used to going against that in practice. If any team can overcome adversity it’s the Lawrence Co. Bulldogs and I’m proud to be on this team.”