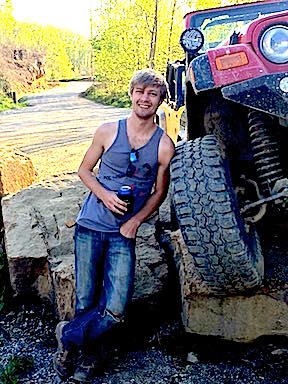 LETCHER COUNTY, Ky. (WYMT) – A Lawrence County high graduate  was flown to the hospital with critical injuries after falling from the top of Bad Branch Falls in Letcher County last night.

Rescue officials say Justin Lee Maynard, 26, of Whitesburg, was hiking with some coworkers when he fell nearly 70 feet from the top of the falls. Officials responded to the scene just after 6:00 p.m. on Saturday. Maynard was flown to the Holston Valley Medical Center in Kingsport, Tenn. with serious leg and head injuries.

A woman from Wise County, Va. fell from the top of the falls earlier this year and lost a leg due to her injuries.

Rescue officials told WYMT the area directly above the falls is off limits to hikers and climbing to the top is extremely dangerous.

Bryan Keith Maynard, his youngest brother and friend who was with Maynard at Holston Valley Med Center just before 2:00 pm today. Here is what he says on his FB page:

“—There has been some very poor communications with the doctors and I would like to post a correction, Justin is not and never was “brain dead” he is showing signs of “low brain activity” and is still alive….he has coughed and made attempts to swallow which is a leaps and bounds improvement but they still don’t think he’s going to pull through…we all know he’s a fighter so let’s please keep praying and don’t give up hope…he needs us all…God bless everyone and stay safe…I’ll keep everyone updated one way or another.”

His older brother, Wilburn “Woody” Maynard contacted The Lazer at 5:00 pm today and said Justin’s condition has not changed and that he is in a deep coma with very feint brain reaction.  Doctors will operate tomorrow but the prognosis is grim.

Woody said the accident took place when Justin slipped at the top of the falls and fell 70 ft. down landing on his feet which pushed his legs up into his sternum and splintered his legs and pelvis. He then fell forward violently hitting his head on the rocks.

Justin is the son of Bernice Maynard, who is by his side. His dad, Wilburn, Maynard, Sr. passed away in 2012.

Maynard, a 2007 LCHS graduate is a former Levisalazer.com intern, who graduated from Alice Lloyd College in 2012. He served two years in the Peace Corps in Panama and other foreign nations.

Justin is currently employed at Apalshop in Whitesburg, Ky.

We will watch this story closely to report the status of Justin’s condition while we join in the hundreds of prayers going up on his behalf. His brothers have said they will contact us as soon as there is any change.