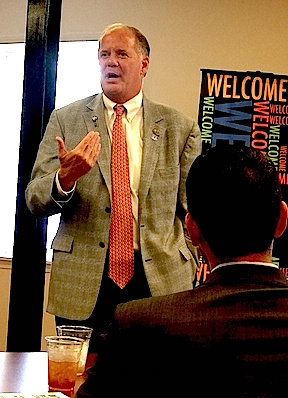 The guest speaker this week was Keith Key, the District Governor of 6740 ( Rotary International) from the Lexington Sunrise Rotary Club. He spoke about Rotary and his Rotary life. He spoke about what it means to him to be a real Rotarian.

“I joined Rotary in 1989, but truly became a Rotarian in 2011.” He began taking a class of underprivileged 6th graders to a graduation celebration at a very nice restaurant, giving them first a class on etiquette in order for them to feel comfortable eating in the establishment.

The club gave 2 scholarships every year, one worth 1,400 and book bags with supplies for the next year.

Key stated with all of the change in the world, Rotary stays the same. It is about helping humanity, he said. Mr. Key states that you must not always see the world for how it is, but how it could be.

He will spend his year as a District Governor visiting every club in his district.

After asking if anyone had questions, the meeting was then adjourned for the week.