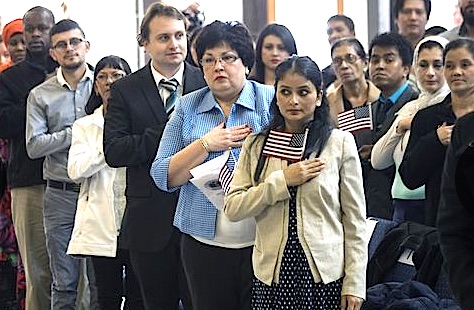 Grimes recognized 156 new citizens from 45 different countries who took the oath of citizenship to officially become Americans. She spoke to the new citizens and their families about the importance of voter participation, civic engagement, and being committed to their communities.

“I have now attended more than 60 naturalization ceremonies as your Secretary of State, and I am just as proud and honored to be here with you today as I was at the first,” said Grimes. “On this special weekend, 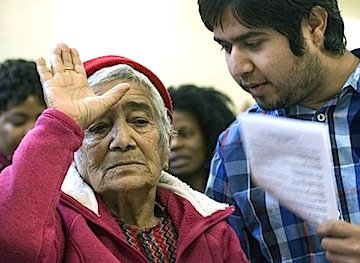 when we celebrate the vibrant cultures that exist on the Earth – and that each of you represent – we also celebrate you as Americans, now citizens of a country that is great because of each and every one of you and because of all of those who have come to our shores before you. We proudly welcome you as citizens of the Commonwealth and of the United States of America.”

Grimes encouraged the new citizens to use one of their newly attained rights as citizens by voting this fall and registering to vote via Kentucky’s online registration portal at GoVoteKY.com. The portal is easy to navigate and it takes just a few short minutes to complete the registration process, Grimes said. “If tens of thousands of Kentuckians can use GoVoteKY.com, you can, too – today,” she told the new citizens.

As part of National Voter Registration Month, Grimes is continuing the state’s longest and largest voter registration effort in more than a decade. She is traveling the state encouraging Kentuckians to use GoVoteKY.com to register or to update their registration ahead of the October 11 deadline for the November general election. About one-third of eligible Kentuckians are not registered to vote.

“I’m counting on you to lead us on a course change when it comes to voting. Each of you must take part in the process. As Americans, our future cannot be built on apathy,” said Grimes.