I had forgotten the almost hourly invasion that was visited upon us by the C&O Railway in a rather routine manner during my ‘growing up’ years in the little town. The environmental assault had both good and bad attributes, I think, as I now have the privilege to understand some of its benefits, while also seeing a much more ecologically protective viewpoint that surely would make the thing entirely impossible in today’s thinking. In fact, without this our little town may have simply weathered away along with the industry in upstream cities, villages, and towns.

I recall that depending upon the weather there were times when I was standing as much as a block away I was nonetheless enveloped in that recurring blanket of dense, heavy, black smoke bellowing from another iron horse passing through town. At times I would turn away and hold my breath to avoid inhaling the airborne solids embedded in the black veil floating down on my person. It was sometimes as if hot particles were striking my face like salt or pepper being shaken by giant hands to add flavor and color to life’s recipe. The tiny specks within the cloud, some still red-hot, would leave a sensation of burning upon my bare cheek. Even grown men standing nearby would take a red or blue bandanna to their face in hopes it would screen the impurities and allow them to survive the temporary assault that would come again and again from the well-traveled tracks.

Times were different then than now, but man knew no better, or perhaps some things represented a better business model even if it had negative effects. Money was the cause that drove the wheels upon the tracks that split the town almost perfectly in half. We knew the smoke could not be helped, after all, because commerce must continue and the benefits of the railroad was far more important than those moments of discomfort. Those black coal cars filled and topped out with the precious cargo for places north or east. The 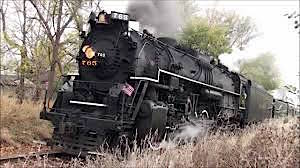 powerful steam engines also pulled freight trains with long expanses of box cars filled with grains, supplies, produce, and equipment. Each was marked with logos from other lines and graffiti saying that ‘Kilroy was here,’ all going south to supply and feed the workers in the coal fields. In some ways the rail system was bigger than the industries it supported. Tunnels and bridges were built, new track was laid, and men on those hand cranked rail carts would look for potential weak spots along the route, lest a rail slip and derailment would follow.

Smoke was simply a fact of life to the communities that lined the routes. After all, that was well before the Surgeon General put a warning on cigarette packages. Some veterans remembered the chemical warfare of WWI and we were yet to comprehend the fallout from nuclear explosions. The smoke from the train came with the trains and frankly, those trains were needed. As a result, housewives would come out now and again to sweep the porches, brushing the black cinders out onto the yard. Teenagers would wash their family cars lest they found themselves embarrassed when picking up the evening’s date that likely would be wearing a white cardigan and bobby socks. White-washed buildings would be grey from the soot until the grime would build enough to require a fresh scrubbing. Some kids would benefit from earning a quarter or two doing the work.

I remember sitting up on town hill watching the little village and seeing the trains come into town from up toward Potters, through the center of town and then continue to disappear up near Wallbridge. The cloud of black smoke that poured from the stack was far larger than the iron engine and its tinder, and would hang heavily in the air for several minutes marking the trail for yet another to follow. It would take a while on a calm day to sweep back on the following train cars and then be dispersed through the yards and streets. Everyone was caught up in the billows would turn away knowing they would have to brush the grainy remnants off their clothing and take care that no embers were still alive. If left, they could burn a small hole in one’s new shirt or waistcoat. I will always remember the smell of the cloud. It was an acrid odor, pungent enough that I remember it even to this day so many years hence. When the odor strikes my senses, I recall at once where I stood to receive yet another battering upon my person. Like a record we played on our gramophone, or ‘hi-fi,’ memories are often tied to our senses, whether a sound or a smell.

It’s funny, that when I think of the sound of the train’s bell and steam whistle, I always remember those times as somehow being romantic, indicative of a simpler life of the day. There’s comfort in those memories. They 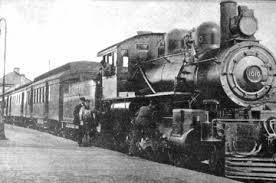 can be depended upon to restore that which was lost, even if for only a few seconds. The sounds, and even the smell of the steam engine continues to evoke memories and makes them seem as real today as yesterday. A few years ago I was surprised after boarding a narrow-gauge locomotive at Dollywood with that the first whiff of the coal-fired smoke I was dragged back to those earlier times of my youth. To me, it was altogether pleasant, as if I’d missed that smell. Somehow I knew I adored that smell and the memories that still flood my mind when I encounter that smoky reminder.

As I pondered this my mind floated me back to another time. In my head I again hear the ‘clickity-clack’ of iron wheels passing over the rail seams, and the spinning drive wheels when the train attempts to pull away from the station. I imagine the earth shaking and the squeal of a wheel in need of oil. I can hear the lonely whistle warning those ahead at the next grade crossing that the train was dangerously near. Soon that intersection, too, would be blanketed with smoke as the ground would shake and the rumble of the cars would create wind enough to scatter the veil to yet another place.

Using the passenger rail service in the winter wasn’t but so bad. Granted, cold air rushed in every time one of the doors at either end of the car was opened. The smoke seemed more ready to blanket the surroundings than to grace the interior of the train, but most of the passengers were smoking away, anyway. I remember an older passenger car that had a pot belly stove for warmth, but most had other kinds of heaters in the winter. That was another story in the summer because air-conditioning was not part of the package. The windows were kept open. That would allow the wind to whip through, bringing with it some of the smoke that would burn the eyes.

At the station when the train was stopped, the smoke was greatly reduced, rising slowly from the stack. Instead it was white clouds of wet steam that rose from underneath that dampened the air and anyone nearby. I used to watch the engineer dismount and oil the moving parts around the wheels and pistons. While stopped, the US Mail was taken off and added from the tall wagons with the steel rimmed wheels. I remember delivering many letters for my family to the postal worker on the mail car. He always leaned over and took them with a smile. My guess is he liked kids. I did, too. Within a few minutes the conductor would wait while passengers and baggage was put aboard before calling out with a ‘board’ (short for ‘all aboard’) and giving a signal either by hand or lantern to the engineer that all was ready.

For certain, these trains were a wonder to a small kid like me, and they remain a pleasant memory for this older man. Yes, steam locomotives were replaced with ‘stream-liners’ that were less expensive and easier 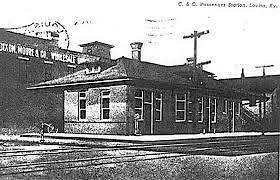 to run. They were also less harmful to environmental. Maybe diesels weren’t as romantic as the old steam engine, and maybe some ‘firemen’ lost their jobs since shoveling coal wasn’t needed, and maybe, just maybe we missed the great clouds of smoke that blanketed our town and the river valley, but the railroads began marketing the new ‘beasts’ as the sleek, modern way to travel.

I think it is sometimes good to pull those old warm and comfortable feelings from the past into our mind’s eye, but at the same time we can see the benefits of progress and be thankful we have lived to see yet another day. I remember a time that may have been hard, yet as a memory is comfortable and sweet. We tend not to remember the negatives, and maybe that’s good. After all, we don’t need to darken our outlook with old baggage. Ours charge is to always keep on the ‘sunny side.’