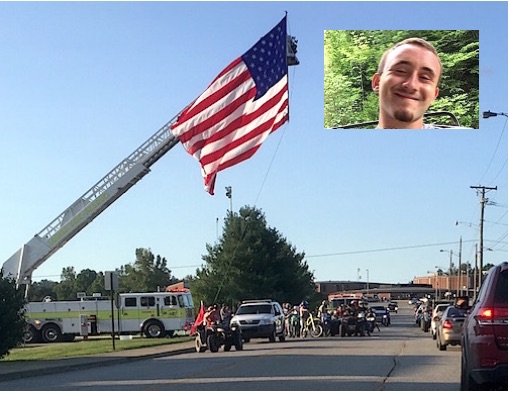 What a wonderful community  we live in.

When called upon they turned out in hundreds to ride the “last ride for Blake” Thursday. Community members from students to parents and teachers to grandparents all showed up for this memorial ride.

Many of them, including his dad, Greene Ramey, said this is what Blake would have wanted.

The ride started at the Rich Creek Boat Dock and proceeded down Rt 32 to old US 23 and then ended at the high school.

All types of vehicles took part in the ride. Dirt bikes and 4 wheelers led the way followed by cars and pickup trucks of all kinds.

Some did wheelies as they circled the school. The convoy stopped under the US Flag shown by the Louisa Fire Department.  The Lawrence Co. Sherriff’s office had a silent presence to ensure the safety of all.

In his memory all the Bulldog football players will wear #45 in Friday night’s game.

Greene Ramey stated “he died doing what he loved to do.”

They retired his bike after the ride.

After a dirt bike accident in Blaine on Saturday afternoon 17 year-old LCHS senior Blake Ramey was flown to Cabell Huntington Hospital (a trauma 1 center) where he remained in a medical induced coma.

While in the ICU doctors attempted to insert a drain tube to reduce brain swelling but the procedure was not successful. Ramey also has suffered from seizures as well as both lungs collapsed. He was on a ventilator and his aunt confirmed that doctors confirmed that he is “brain dead” Thursday. His organs were donated so that others may live.

A gofundme account on Facebook has been set up to help the family with expenses during this time. Funeral arrangements can be seen on the Lazer Funeral Announcements. 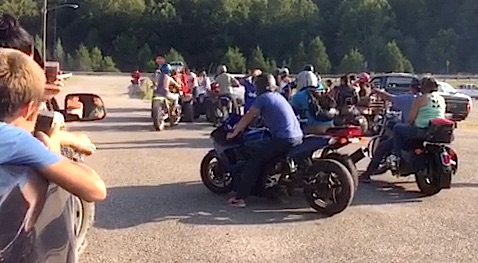