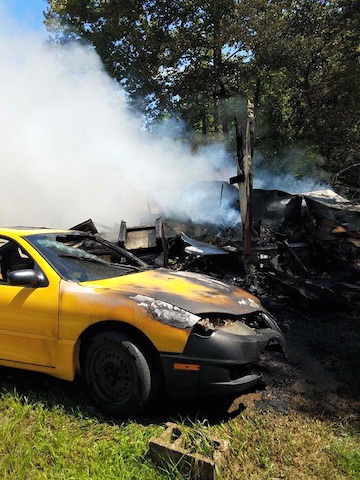 An investigation by state fire officials continues into a large fire in southern Lawrence County Tuesday afternoon, that left a mobile home destroyed, an automobile with significant heat damage, along with a second mobile home getting moderate fire damage.

The second home ended up being saved from the inferno due to the heroic efforts of area fire departments that responded to the blaze scene. 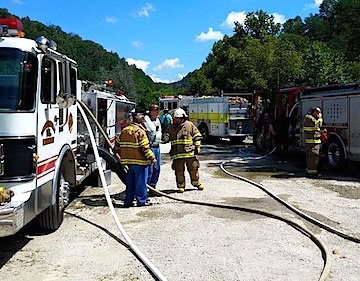 Just before 1:30 P.M. on Tuesday August 30, Lawrence County E-911 received an emergency call of residential fire at a mobile home trailer located next to US 23 in the Lomansville area, near the Lawrence/Johnson county lines, located just across the road from site of where the former Lomansville grocery store, Family Foods was located, which also itself burned down due to fire a few days after last Christmas 2015.

Minutes before both Louisa and Cherryville fire departments arrived at the scene, Lomansville firefighters made a second 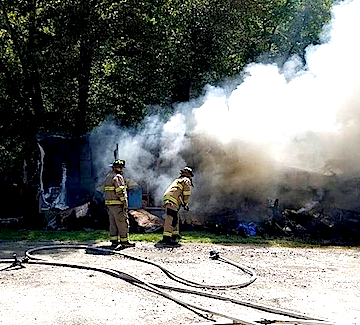 mutual aid request call, to the W.R. Castle Fire-Rescue Department, out of Johnson County, after the flames consuming the initial trailer, had ignited a second nearby trailer, and was also causing fire damage to a parked Chevy Cavalier coupe sedan, risking the automobile to being engulfed, and potentially exploding the car’s gasoline tank.

Luckily, all four of the responding fire departments were able to extinguish the flames, saving the second mobile home and the car. The fire was declared fully out a few minutes after 3 P.M. All responing emergency units left the scene by 3:30 P.M.

There were no injuries reported during the fire. The Kentucky State Fire Marshall’s office will be looking into what and why exactly caused the blaze to occur.