Special Meeting of the Water Board, City of Louisa

LOUISA, Ky. — Mayor Harold Slone requested a special meeting to discuss a request for prices on a study to look at the last evaluation of the sewage system for Louisa. 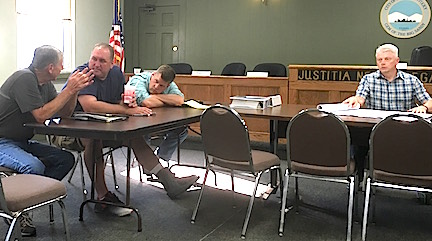 Kentucky Engineers agreed to do the study and provide it to the city.

This will determine what improvements and problems the system currently has.  Kentucky Engineers explained what was done in the last major renovation that was completed in 2013. Bob Taylor, an engineer with Kentucky Engineers stated that a proposal was put together which describes in detail what could be done to repair and rehabilitate the city’s sewage system.

He proposed that a camera inspection be completed first so that the nature of the problems could be seen.  When a camera is run through the lines a contractor could see exactly what the problem is and that is the most accurate way to determine the needs of the city.

Smoke studies have been completed in the past but this method does not show exactly what the problem is. The first phase would be the camera inspection of the downtown area, then the south end of the city and finally the area by the hospital.

The sewer lines would have to be cleaned first prior to the camera inspection.  The cost estimate of this project would be around $250,000.

The city could apply for grants and loans based on the contractors bid, Taylor said.

A motion was made by Heath Preson and second by Sam Lester to proceed to the City Council for approval.

INJURED LC STUDENT HAS TAKEN TURN FOR THE WORSE