INJURED LC STUDENT HAS TAKEN TURN FOR THE WORSE 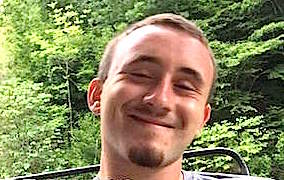 HUNTINGTON, W.VA, — A 17 year old senior at LCHS who was injured in an accident last weekend has taken a turn for the worse, family members said this afternoon. It has been widely reported that Blake Ramey has died but a family member confirmed at 3:13pm that he has not died.

After a dirt bike accident in Blaine on Saturday afternoon Blake Ramey was flown to Cabell Huntington Hospital (a trauma 1 center) where he has remained in a medical induced coma. Reports from the family last night said that Blake had taken a turn for the worse and pleaded for prayers from the community for him.

While in the ICU yesterday doctors attempted to insert a drain tube to reduce brain swelling but the procedure was not successful. Ramey also has suffered from seizures as well as both lungs collapsed. He was on a ventilator this afternoon and his aunt confirmed that doctors confirmed that he is “brain dead”.

The Community has shown an outpouring of support for a full recovery for the well liked Ramey. A gofundme account on Facebook has been set up to help the family with expenses during this time.

LCHS Golf team off to a good start, Goble and Akers leading the way