TOLSIA TO HOST WAYNE TONIGHT AT HOME IN SEASON OPENER 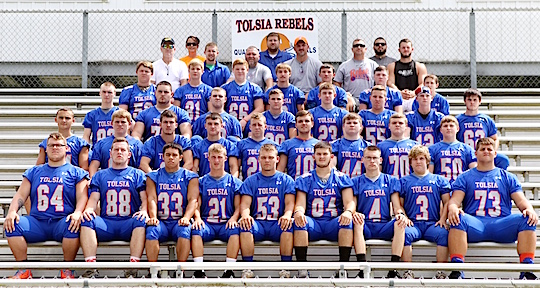 Fort Gay, W. Va. —  The Tolsia Rebels will open the 2016 season vs Wayne co. rival Wayne tonight at home in the friendly confines of Wilt Salmons field. The Rebels coming off a 12-2 record and a state championship appearance in Wheeling last year will be looking for back to back wins over the Pioneers after winning 49-34 on the road in 2015.

Tolsia lost three running backs that went over 1,000 yards last season but will return some huge offensive lineman that paved the way for Luke Presley, Seth McMillion and Jennings Holland that includes Seniors Cameron Nichols and Jeb Evans. Junior Wayne Williamson will step in at QB and will have Seniors Logan Presley and Derek Meredith at RB’s, Seniors Jordan Johnson and Brian Campbell will be targets for Williamson if the Rebels decide to air it out.

The Rebels moves to Single A and looks to compete for a state championship even though they only have 9 games on the schedule. Tolsia tried every thing possible to find another game but it just wasn’t in the works. After the drop from double a the Rebels moved out of the Cardinal conference and had to find new opponents for 2016 and coming off a runner up finish not many teams fielded calls from Tolsia.

“… We’re playing a loaded schedule again, but hopefully that will get us where we need to be and that is the playoffs and then it’s anyone’s game. Ball control will be key for us this year not sure if we have a breakaway player like we did last year but I think we’re every bit as athletic as last season. We may lack some experience on defense we is a ton from 2015. Our goal as coaching staff is to build a program not just be good every few years.” We have our work cut out for us the first couple weeks with AA powers in Wayne and Mingo Central, we’re looking forward to the challenge we will be ready tonight.”

Want to see past Lazer stories in archives? If you would like to see a story that has already rolled into our Lazer archives click on the category it was posted in at the top of the page on the menu bar. Then scroll down until you see its title and click on it. Some articles go back as far as 2009 but some photos have been removed.