INEZ, PIKEVILLE REGENTS AMONG GROUP TO TAKE OATH OF OFFICE AT MSU 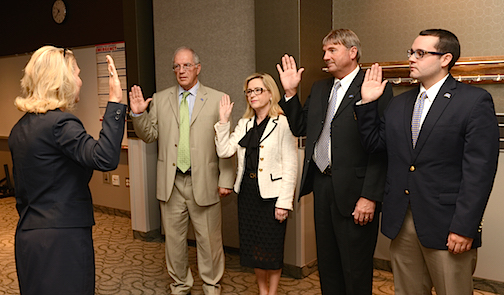 MOREHEAD, Ky.—-Morehead State University officially welcomed four new Board of Regents members – – Adam Abbott of Buckhorn, Craig Preece of Lovely,  Patrick Price of Flemingsburg and Terri S. Walters of Pikeville – – Friday, Aug. 26, at its special meeting held in the DeMoss Suite within the Center for Health, Education and Research.

The board also re-elected Wayne Martin as vice chair.  Martin is a television consultant. Before entering broadcasting, Martin had a successful career as a college and high school basketball coach. As head coach at Morehead State University from 1978-1987, he led the Eagles to two NCAA tournaments.

Martin graduated with honors from MSU with a Bachelor of Arts in business degree, a Master of Arts in Education degree and Rank I Administrative Certification.

Sharon S. Reynolds, assistant to the president, was re-elected board secretary while Beth Patrick, chief financial officer and vice president for administration, was re-appointed treasurer.

The Regents amended the campus master plan to include a purchase of real property for a water sediment basin. The land is a ½ acre parcel located on the east side of Rowan Street and north side of Bridge Street.

The Board also had discussion on the presidential search, proposed 2017 meeting dates, the Fair Labor Standards Act and Personnel Policy PSNE-5, Overtime Pay for Employees Classified as Staff Nonexempt, and on Personnel Policy PAc-26, Termination of Faculty for Financial Exigency and Discontinuance of Program.

Board chair Paul C. Goodpaster stated that PAc-26 and PAc-22 will be voted on during the September meeting.

The next quarterly meeting will be Friday, Sept. 30.

Want to see past lazer stories? If you would like to see a story that has already rolled into our Lazer archives click on the category it was in at the top of ANY page on the menu bar. Then scroll down until you see its title and click on it. Some articles go back as far as 2009 but some photos have been removed.