Stephen Montgomery was presented the past president plague. 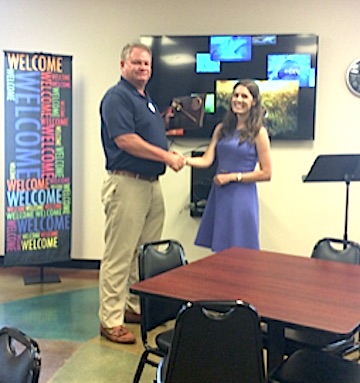 There was no guest speaker today, so Lindsey Case gave a presentation on a couple of activities that she is doing in her high school classroom that has them giving back.

It started with a dollar club where the kids in all of her classes put in one dollar and then decide the charity that they would like it to go to. Some of the charities in which they have donated to include the Johnson County Flood relief, Wreaths for America, and to buy Halloween candy to give out at Blaine and Fallsburg.

Now they have decided to become donors to the Purpose Hotel in Nashville, TN. This is a hotel chain where every time you book a room, it serves a bigger purpose such as, a child gets sponsored, the internet fee fights human trafficking, every product such as soap shampoo linens furniture, is purchased from partners who are making a difference.

“It’s an amazing thing to teach our high school students who will soon be the leaders of our community, to give to great causes,” Ms. Case said.

In closing, Michelle Brewer, a new member was recognized. Next week’s speaker was announced to be the District Rotary Governor, and with that the meeting was adjourned.

Want to see past Lazer stories in archives? If you would like to see a story that has already rolled into our Lazer archives click on the category it was posted in at the top of the page on the menu bar. Then scroll down until you see its title and click on it. Some articles go back as far as 2009 but some photos have been removed.